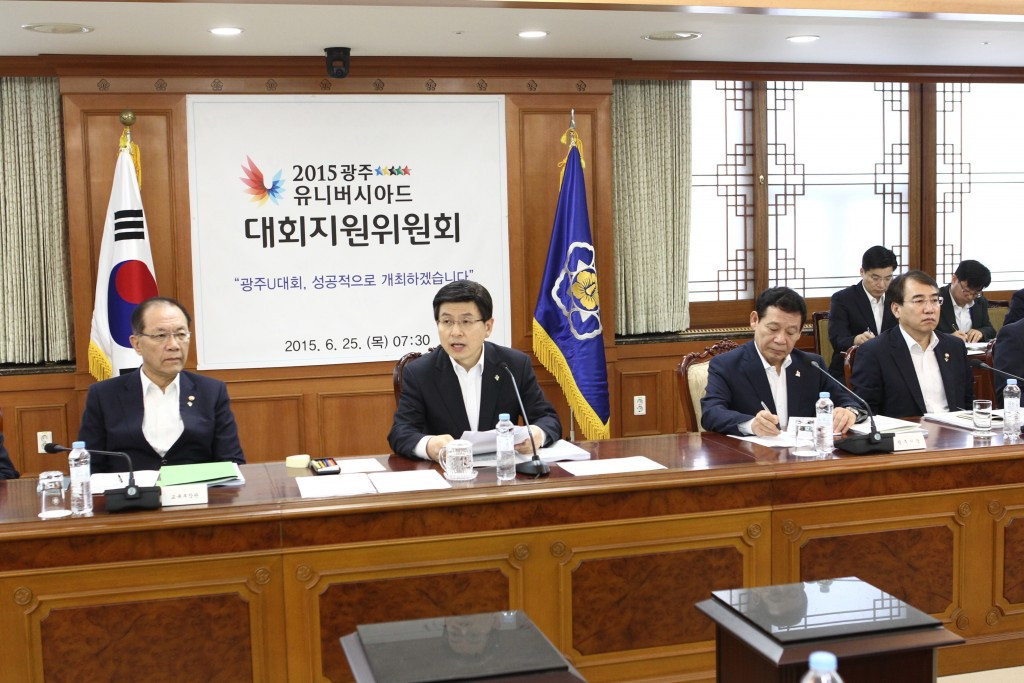 South Korean Prime Minister Hwang Kyo-ahn has held a meeting in Seoul to discuss measures aimed towards supporting the Gwangju 2015 Summer Universiade, which is due to begin next Friday (July 3), with the Middle East Respiratory Syndrome (MERS) virus a key area of conversation.

The Prime Minister was given a report by Yoon Jang-hyun, Gwangju 2015 Co-President and Gwangju Metropolitan City Mayor, who assured him that preparations for transportation, competition operation, venues, accommodation, as well as safety and security had all been completed.

Despite Gwangju having had no reported cases of MERS, which has reportedly claimed the lives of around 30 South Koreans, it was decided both Gwangju 2015 and the central Government would take on extra safety and security measures to keep the city a MERS-free environment during the competition, which is due to be take place until July 14.

Special clinics with some of the country’s best physicians are to be established for both the athletes and tourists visiting the city, while both the World Health Organisation and the International University Sports Federation (FISU) Medical Committee are due to be on-site through the Universiade to ensure participants and visitors are safe.

“The 2015 Gwangju Summer Universiade is an opportunity to show our crisis management skills after the MERS outbreak”, said Hwang following the meeting.

Additionally, as a precaution against the virus, heat sensors have been installed at the gates, entrance of the Athletes’ Village dining hall and the Polyclinc.

They are aimed to prevent the spread of the virus with the athletes health condition set to be checked by the thermo-scans.

The Athletes’ Village was officially opened by its Mayor, Lim Duck-ho, at the Flag Plaza yesterday, where he was joined by Hwang-sik.

Hwang-sik delivered a speech to mark its opening prior to flags of the FISU, South Korea, the Korean University Sports Board and the emblem of the Gwangju 2015 being raised at the plaza.

The Vllage, developed from the 30-year-old Hwajeong Jookong Reconstruction Apartment Complex, is located in the centre of the city and is 10 minutes from the Universiade Main Stadium and 15 minutes from Main Press Centre.

There are 2,445 housing units which be used as accommodation for the athletes and officials until July 17, while the dining hall will be a buffet style format with a variety of woldwide cuisines.

More than 3,000 delegates from over 145 countries are expected to attend the 11-day Summer Universiade.