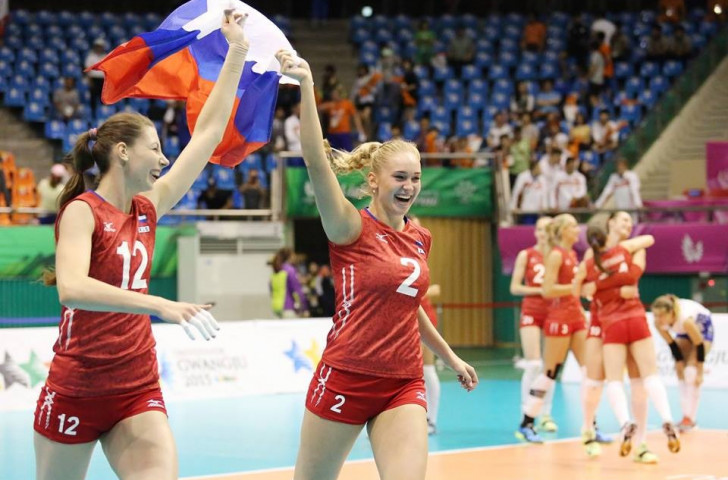 Russia overpowered Ukraine to claim the women's volleyball title today at the Summer Universiade in Gwangju as the nation squeezed past China in the overall medals table.

In a match which had political implications as well as sporting ones, the Russians eased through the first game 25-12, before winning the other two by a slightly tighter but still comfortable 25-17, 25-17 margin.

This put them on 29 golds overall, level with China, but enough to shift them into second overall behind hosts South Korea due to having 33 silver medals in comparison with the Chinese 17.

But the South Koreans, inspired by a further victory today for female golfer Lee Jeongeun, moved onto 35 gold medals and appear unlikely to be caught with a day to go.

The hosts will be disappointed however to only take the bronze medal in their favourite sport of baseball after a 2-0 semi-final loss to Taiwan.

The gold was ultimately shared between the Taiwanese and Japan today after heavy rain at the Gwangju-Kia Champions Field caused repeated delays and ultimately cancellation.

Elsewhere, there was more Japanese success in golf as Kazuki Higa claimed the individual title before helping his nation to a team victory.

Seyed Khosrowfar underlined the dominance of the Iranian men's taekwondo team by claiming the under 74kg title but there was a rarer female victory also for the Central Asian nation today as Akram Khodabandeh kicked her way to over 73kg honours.

Seven nations shared the medals today in athletics, with Germany enjoying the best of the action with three victories, led by Anna Maiwald's superb heptathlon win with a personal best haul of 6,111 points.