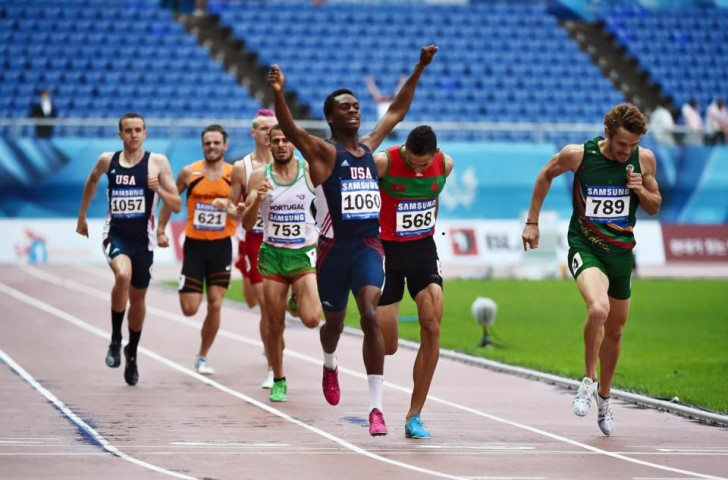 On another day in which action took place in wet and windy conditions, the American was down in fourth place at the halfway stage before picking up the pace to move into medal contention with half-a-lap to go.

He then overhauled long-time leader Rynardt van Rensburg of South Africa to triumph in 1min 49.05sec and become the first US man to win the two-lap race at the Universiade since Evans White in 1979 in Mexico City.

There were more comfortable wins on the track for Azerbaijan's defending champion Hayle Ibrahimov, the only man to break 14 minutes in 13:44.28 to claim 5,000m victory, as well as for Docus Agok of Uganda in the women's 1500m.

Japan claimed men's 4x100m honours, while Poland overhauled both the US and Russia to claim the women's 4x400m crown.

But Russia remained the dominant nation, with long jumper Pavel Shalin managing 8.29 metres in taking their 12th gold of the competition.

That was enough for Russia to stay ahead of China in second place on the medals table, with both on 32 golds, although hosts South Korea remain well clear on 44 after another superb day.

Russia beat Ukraine for the second successive day in a volleyball final, this time in the men's event, while France beat Russia in the women's football final.