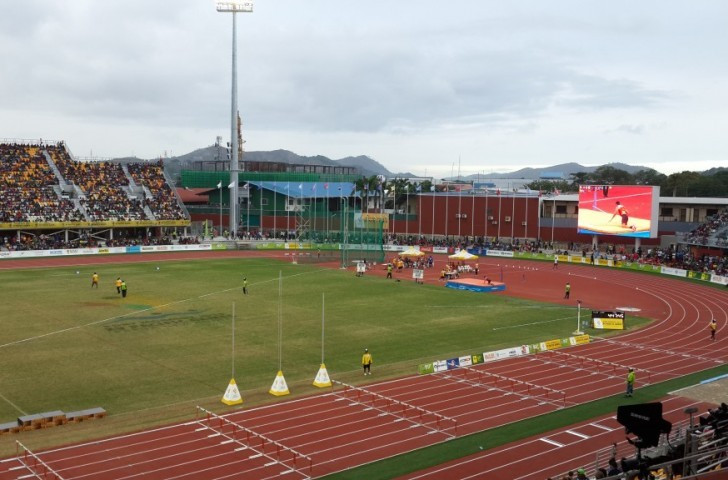 Papua New Guinea claimed the women’s and men’s 4x400 metres relay double to round off another hugely successful day of athletics in style here.

A blistering final leg from Toea Wisil, who earlier in the evening won 200m gold, saw Papua New Guinea take the women’s title in a time of 3min 45.13sec ahead of Fiji and New Caledonia.

It was her fourth gold medal of Championships.

Following on from team-mates Sharon Kwarula, Donna Koniel and Afure Adah, the host country's star sprinter had a lot of ground to make up on Fiji’s Ana Baleveicau as she took the baton, but still went on to secure victory by more than a second.

It was a different story going into the last leg of the men’s race as Nelson Stone was tasked with fending off the challenge of Fiji's sprint king Ratu Banuve Tabakaucoro, the man who had earlier beaten him to the men’s 200m title with a Pacific Games record time of 20.53sec.

Tabakaucoro cut a huge chunk off the lead established by Papua New Guinea’s first three runners - Mowen Boino, Kaminiel Matlaun and 200m bronze medallist Theo Piniau - and looked destined to overtake Stone as the pair came into the last bend before running out of steam in the home straight.

Fiji’s team ultimately fell 1.49 seconds short of the winning time, which was 3:13.86, while the Solomon Islands’ were more than 14 seconds behind in third.

In the women’s 200m race, Wisil posted a winning time of 24.05 to finish ahead of Fijian pair Younis Bese and Sisilia Seavula, second and third respectively.

Another five gold medals came the way of the host country on the fourth day of Port Moresby 2015 athletics, with the first being won by Kwarula in the women’s 100m hurdles.

The 28-year-old clocked a time of 14.40 to cross the line ahead of Lucie Turpin and Manuella Gavin, the silver and bronze medallists from New Caledonia.

This was followed by success in the men’s 110m hurdles for compatriot Wala Gime, whose time of 14.80 bettered that of fellow Papua New Guinean Mowen Boino by 0.14 seconds, with Samoa's Tutaia Galoiola finishing third.

Shortly after, in the women’s 1500m final, Miriam Goiye led the host nation’s clean sweep of medals with a time of 4:45.44 as Jenny Albert finished narrowly behind in second and Poro Gahekave bagged the bronze medal.

There was also reason for the home crowd to celebrate following the concluding three elements of the women’s heptathlon competition - long jump, javelin throw and 800m.

Prior to Tabakaucoro’s gold medal in the men’s 200m event, Fiji struck gold in the men’s high jump thanks to Rajendra Prasad’s leap of 2.03m.

New Caledonia’s Ogun Robert had to settle for silver, while Sailasa Kalouniviti from Fiji, completed the podium.

Robert’s compatriots Nordine Benfodda, Thierry Cibone and Linda Selui, did not have to accept second best, however, as they came out on top in their respective events.

Benfodda won the men’s 5,000m with a time of 15:54.55 as the Solomon Islands’ Rosefelo Siosi held off a late surge from Tahiti’s Loic Mevel to secure silver.

Selui registered a throw of 47.72m in the women’s javelin to finish ahead of compatriot Bina Ramesh and Tahiti’s Gwoelani Patu.

The one other final of the night, which happened to be the first, went the way of Samoa as Alexander Rose recorded a throw of 56.40m in the men’s discus to finish well clear of nearest rival, Papua New Guinea’s Debono Parak, and third-placed Erwan Cassier of New Caledonia.