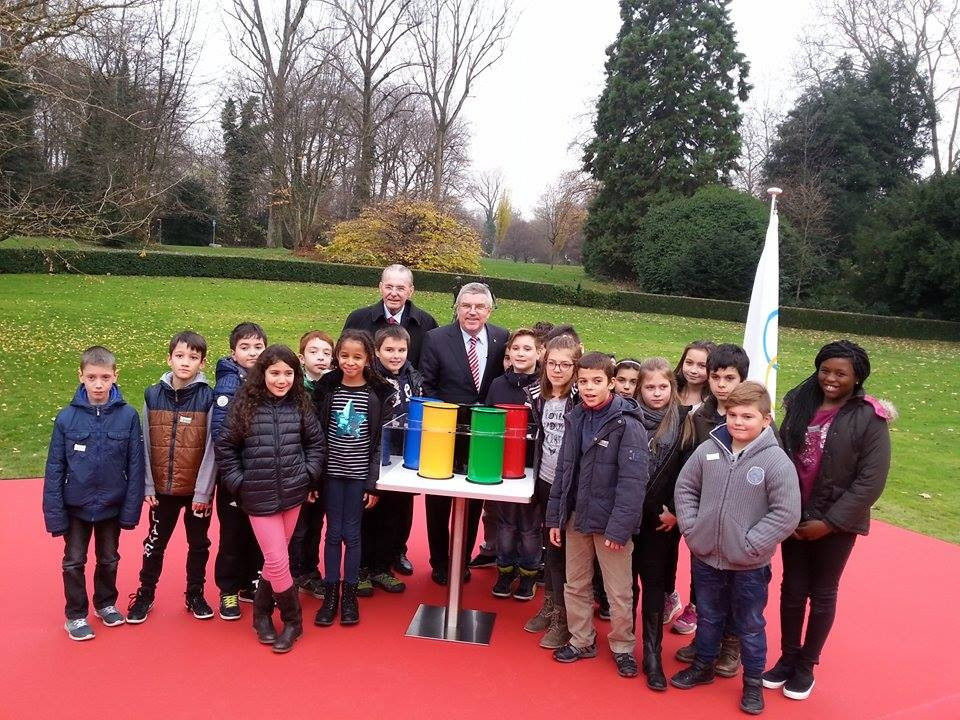 The first stone of the new International Olympic Committee (IOC) headquarters has been laid here today at a ceremony attended by President Thomas Bach and members of the organisation’s Executive Board during the final meeting of the year.

The event saw Bach present a time capsule featuring five cylinders draped in the colours of the Olympic Rings, each of which includes a particular piece of history linked to the Olympic Movement.

The cylinders include manuscripts by Baron Pierre de Coubertin, founder of the IOC, photos of the model of the new Olympic House and the document in which the city of Lausanne granted the IOC a lease until 2115.

Minutes of the City Council meeting held in 1915, where the IOC was formally established in Lausanne, and a handwritten version of the speech made by Bach when Agenda 2020, the strategic roadmap for the future of the Olympic Movement, was passed feature in the other two cylinders.

The ceremony was also attended by young children from the region and comes during the 100th anniversary year of the IOC being based here in the Swiss city.

“Throughout this year, we have celebrated 100 years together,” Bach told attendees at the ceremony.

“Today, we are looking to the future, the future of the Olympic Movement here in Lausanne.

“What better symbol of our attachment to the Olympic Capital than the construction of a new building?"

The new IOC building, called Olympic Unity House, will be built next to the current headquarters here.

It will be constructed by Copenhagen-based architecture firm 3XN and will cost around CHF160 million (£107 million/$161 million/€148 million) with a firm announcement date yet to be revealed by the IOC.

“My thanks go to the firm 3XN for creating this modern and transparent architectural project, which so well illustrates the spirit of our Olympic Agenda 2020," said Bach.

“We find in it the symbols of integration, movement and dynamism, peace and unity - concepts which are so dear to Olympism, our Movement and the IOC.”

The headquarters will bring together the 600 staff working for the IOC, who are currently spread across five different locations in the city.

Prominent features in the new base for the organisation include an open staircase formed by a series of staggered wood rings, lake water for building systems and optimised natural lighting, designed to ensure the sustainability of the facility.

Some buildings on the current IOC headquarters site, including a multi-function centre built only in 2005, could be demolished but the Château de Vidy will stay having being officially recognised as a historical monument since 1971.