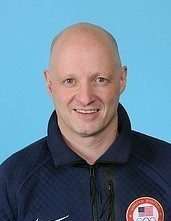 USA Curling has announced its coaching teams for the upcoming season, which will include the Pyeongchang 2018 Winter Olympic and Paralympic Games.

Derek Brown will take charge of his sixth season as director of high performance for the men's Olympic team.

He will be joined by coaches Phill Drobnick, Scott Baird, Jake Higgs and Dave Jensen.

Ann Swisshelm is leaving her role as women’s national team coach after three seasons and has not yet been replaced.

Her time in charge included a fifth-place finish for Nina Roth's rink at this year’s World Women’s Championship in Beijing.

“I am proud of the work accomplished as a coach for USA Curling,” said Swisshelm.

“These successful Championships secured our country’s 2018 Olympic position where the athletes of Team USA will achieve great things.

"I step away having treasured every minute with those athletes.

"Moving forward, they have my unwavering support and continued gratitude.”

Swisshelm became a national coach after retiring from a playing career that included two Olympic Games at Sochi 2014 and Salt Lake City 2002, as well as a World Championship title in 2003.

A replacement for the women’s national coaching position will be sought this summer.

The US have booked places in both the men's and women's Pyeongchang 2018 Olympic competitions, with Roth and John Shuster leading their sides to success in qualification.

The Olympic Trials will take place at Baxter Arena on the University of Nebraska's Omaha campus between November 11 and 18.

The victorious teams will be named as the players for Pyeongchang 2018, subject to approval by the United States Olympic Committee.

The US will also be represented in the inaugural mixed doubles Olympic curling tournament with trials taking place in December in Blaine.

Competition at the Games will take place from February 9 to 25 in South Korea next year.

On the Paralympic side, wheelchair national coach Steve Brown has also left his position.

Rusty Schieber, who has served as assistant national wheelchair coach since 2008, has accepted an initial one-year term as Brown's replacement.

One-year deals have also been agreed with Tony Colacchio as an associate national coach and Marc DePerno, who will continue in his role as national wheelchair outreach and development programme director, a position he has held since 2007.