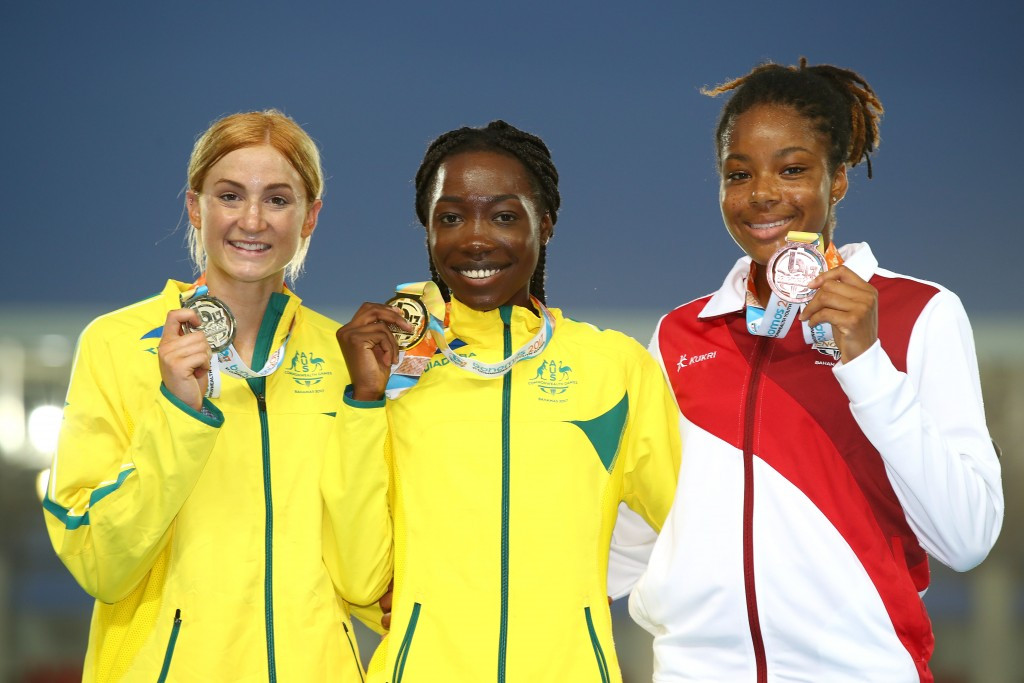 Bendere Oboya led home an Australian one-two as she timed her late surge for the line to perfection to overtake Australian counterpart Ella Connolly and clinch a thrilling victory in the girls' 400 metres at the Commonwealth Youth Games here tonight.

The 17-year-old, born in Ethiopia, finished in a time of 52.69sec, 0.03 seconds in front of her team-mate, to secure the gold medal in dramatic fashion.

The times recorded by the Australian pair would both have been enough for the World Under-18 Championships title at the recent event in Nairobi as the Czech Republic's Barbora Malikova took victory in the Kenyan capital in 52.74.

Amber Anning of England was almost one second adrift of her Australian rivals as she came through to take bronze.

Triniti Tutti of Canada continued her superb display at the Games as she added the girls' discus crown to the shot put title she claimed yesterday by throwing 49.57 metres.

The 17-year-old is fast emerging as one of the stars of the event here.

Her best attempt was over four centimetres further than Tatiana Kaumoana of New Zealand could muster as she was forced to settle for silver.

It proved to be a successful night for the Australian athletics team as Alexander Kolesnikoff had topped the podium in the boys' shot put earlier on the second evening of finals.

Kolesnikoff ensured he will make the long journey back home with the gold medal around his neck, throwing a best attempt of 19.76m to beat New Zealand's Nicholas Palmer.

Palmer managed 19.57m and the two were way out in front of the rest of the field, with Jamaican Cobe Graham's 17.80m enough for the bronze medal.

The boys 400m honours were sealed in style by Zambia's Kennedy Luchembe, who showed he had the legs in the final stages to add another gold medal to the African nation's total in The Bahamas.

Luchembe, who only turned 16 earlier this month, crossed the line in 47.63, going past eventual silver medallist Vaugn Taylor of Canada to seal an impressive win.

Ramone Lindo of Jamaica, who are still waiting for their first sprinting gold of the Games despite their rich tradition in the sport, won the bronze medal.

Elsewhere, Sheldon Noble delivered a rare title for Antigua and Barbuda by winning the boys' long jump thanks to a best effort of 7.64m.

Denvaughn Whymns delighted the home crowd inside the venue named after Bahamas' 1958 Commonwealth Games 220 yards gold medallist by earning bronze for The Bahamas.

A further eight gold medals are due to be on offer on the penultimate day of athletics competition here tomorrow.