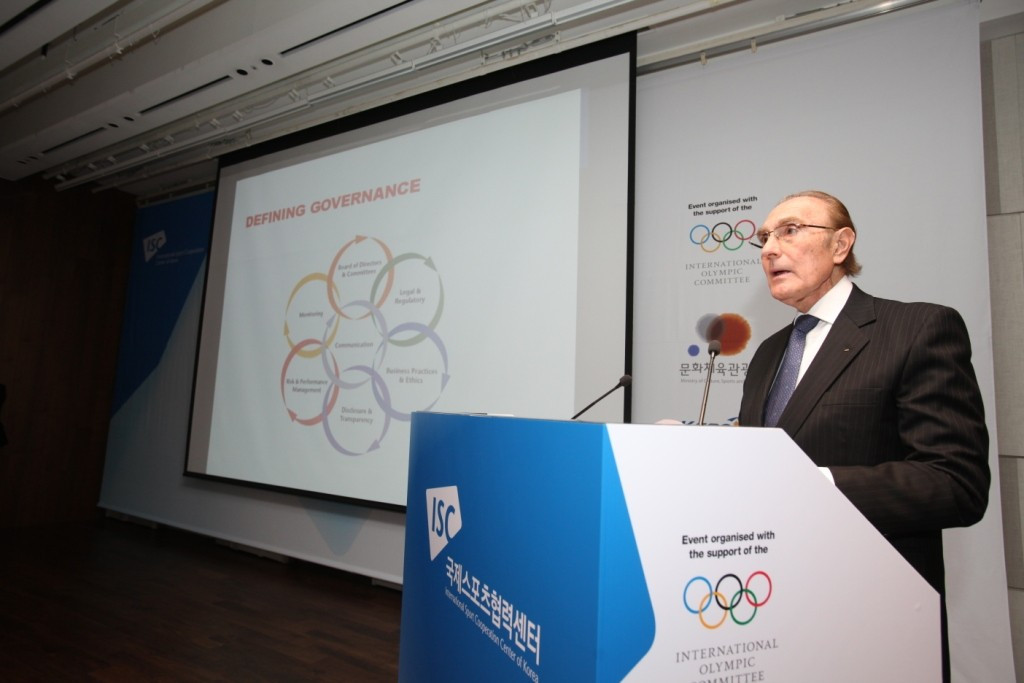 The 78-year-old joined the IOC in 1982 and is the third longest serving current member after Canada's Richard Pound and Italy's Franco Carraro.

He would seemingly only be permitted to serve two years in the position, however, due to the maximum age limit of 80.

IOC President Thomas Bach does have the power to permit five extensions to the maximum age limit.

But this is only possible for those exceeding the lower ceiling of 70 introduced for members joining after 1999.

Dibós is a former rower who is currently serving as a vice-president of World Taekwondo and as a World Council member of the International Automobile Federation.

The former Mayor of Lima told insidethegames that he has stood for the IOC Executive Board on two previous occasions and been persuaded to withdraw each time by successive IOC Presidents, Juan Antonio Samaranch and Jacques Rogge.

In 1988, he stepped aside in favour of the first Chinese IOC member Wu Jingguo, before doing the same 17 years later in favour of Singapore's Ng Ser Miang.

Ng organised the 2005 IOC Session in Singapore and Dibós is hoping that helping to arrange this year's event in Lima will result in a similar upsurge in support.

"My experience at an international level has provided me with knowledge of the importance of building sincere partnerships with our stakeholders and International Federations in order to grow sports around the globe," he added.

He claims the ongoing friction between sporting and political bodies in Peru, where his ally José Quiñones has been replaced as President of the Peruvian Olympic Committee this year, will not affect his chances.

Hoevertsz, Oswald and Schmitt have all now confirmed their candidacies to insidethegames after they were exclusively revealed yesterday.

"I decided to put my name forward having been elected as an IOC member 11 years ago," said Aruba's Hoevertsz, who represented Netherlands Antilles in synchronised swimming at Los Angeles 1984.

"During that period I was privileged to serve on different IOC Commissions and I believe that I am prepared to take this next step after more than four decades of active participation in sport.

"I am from a small island nation in the Caribbean and therefore understand the particular issues that this entails.

"I am an Olympian, the first woman to serve on the Executive Committee of our continental association, with experience as secretary general of a National Olympic Committee, and also of a National Federation.

"I am very much involved with young people, in particular in and through sport.

"I hold a law degree from the University of Leiden and have 26 years of experience working for the Government of Aruba, as of 2009 as the Permanent Secretary to the Council of Ministers of my country.

"My true passion is sport and I enjoy working as part of a dedicated team to serve the interest of an organisation and ultimately of the athletes to the best of my abilities."

Oswald, 70, cited his withdrawal from last year's elections in Rio de Janeiro as well as his chairing of an investigation into Russian doping at Sochi 2014 to justify his campaign.

"As you maybe remember, last year in Rio, I withdrew my candidacy for the IOC vice-presidency to give priority to Uğur Erdener, because he was already a member of the Executive Board," he told insidethegames.

"I thought that the Executive Board member position that he left vacant would be immediately filled and that I would be able to claim this responsibility.

"This was not the case and it is only this year in Lima that Mr Erdener's vacant post will be subject of an election.

"Therefore it makes sense for me to apply and I will.

"The President, having assigned me the important responsibility of leading the Disciplinary Commission to clarify the doping allegations regarding Russian athletes in Sochi and to sanction all the violations that can be established, I think it would facilitate my task if I were a member of the IOC Executive Board."

Schmitt, 75, and the fourth longest serving IOC member after being elected in 1983, outlined roles including his former Presidency of Hungary and his leadership of the Budapest 2024 Olympic bid before it was abandoned earlier this year.

"I would like to inform you and the readers of insidethegames that I announced my candidature for the IOC EB membership," he said.

"Based on my experiences, being IOC member since 34 years, being Olympian - gold in Mexico [1968] and in Munich [1972] in fencing - having been President of one of the oldest and the most successful NOC, the Hungarian NOC for 21 years, I could be of help to the President and to the entire Olympic Movement.

"I had the honour to be the member of the Executive Board for eight years, I finished my mandate in 1999 as first vice-president.

"During the past 34 years I have served our wonderful organisation in various roles and positions.

"I was vice-president of the Athletes' Commission, for 10 years I served as chief of protocol of the IOC and one of my proudest accomplishments was chairing the Sport and Environment Commission for 17 years.

"I am convinced, if elected, I could successfully and positively contribute and serve the IOC members, the Executive Board and the entire Olympic Movement during the last five years of my active IOC membership."

Gumel has not yet responded to insidethegames' request for him to confirm his candidacy but he has written to IOC colleagues canvassing their support.

Two ordinary IOC Executive Board positions are up for grabs in addition to a vice-presidential position vacated by Australia's John Coates.

United States' Anita DeFrantz, who has already served four years on the Executive Board, is planning to stand for this position.

Oswald told insidethegames that he was considering also contending the vice-presidential slot but decided against doing so after hearing of DeFrantz' intentions.