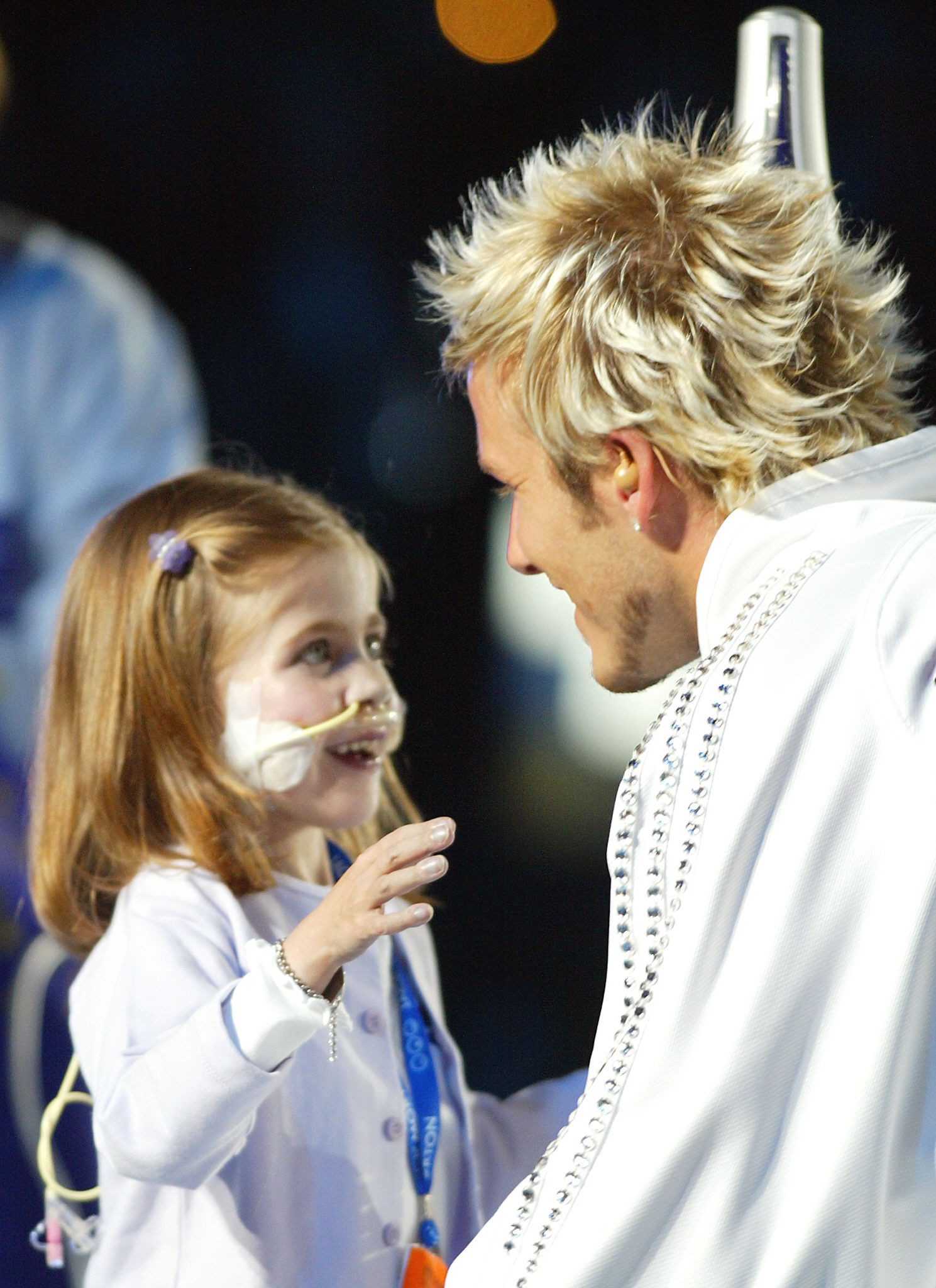 In 2002, there was no bigger sportsman in the world than David Beckham, the England footballer who played for Manchester United and whose marriage to a Spice Girl made him an international icon just as likely to appear on the front pages of the newspapers as the back.

So, imagine the excitement at the Opening Ceremony of the 2002 Commonwealth Games in Manchester when Beckham appeared like a white knight as he knelt before the Queen to help a tiny terminally-ill girl present him with the Baton at the end of a Relay that had travelled 63,000 miles before it reached the United Kingdom and was carried by 5,000 runners.

Beckham wore white from the tips of his bleached hair to the trainers on his feet as he took the Queen's Jubilee Baton from Canada's 1996 Olympic 100 metres champion Donovan Bailey at the City of Manchester Stadium and ran the final metres towards Kirsty Howard, a six-year-old girl with a rare and fatal heart disorder.

The local hero, captain of England, knelt down beside the little girl, her 20 kilogram oxygen unit by her side, and kissed her face before taking her hand and leading her towards the Queen.

Kirsty, an awed smile on her lips and holding tight to Beckham, walked to the Queen and shyly presented her with the Baton.

Kirsty had been born with her heart back to front - one of only two people in the world ever to be born with the condition - and when she was four had been given only six weeks to live in February 1999.

But she had defied the doctors and became the public face of a fundraising campaign for a Manchester children's hospice.

It was the most poignant moment in an Opening Ceremony that focused on Manchester's party lifestyle, industrial history and inclement weather.

Kirsty had first met Beckham in 2001 when she was a mascot for England's 2002 match against Greece, a game remembered for a last-minute equaliser he scored from a free-kick that ensured his team qualified for that year's World Cup in Japan and South Korea.

BBC commentator John Motson called her "the bravest person on the pitch".

Beckham's involvement in the Opening Ceremony at Manchester 2002 had long been rumoured but no-one expected it to be so emotional and poignant.

"I didn't know that David was going to be there," Kirsty recalled on the eve of Glasgow 2014.

"I was just standing there waiting and he came round the corner.

"He just gave me a hug and we went towards the Queen.

"The Queen smiled at me.

"The reaction from friends and family was amazing.

"I felt honoured to be there and everyone that I know was very proud.

"It still feels an honour to have been part of it."

Kirsty continued to defy the odds and battle against her illness.

In 2003 she started the first Great Manchester Run and took part in the race, wearing the number one vest in her wheelchair.

She was awarded the Helen Rollason Award by the BBC in 2004 for her courage and determination and has also received the Child of Courage award and the Pride of Britain award.

Kirsty was the face of the charity appeal for Francis House Hospice, originally opened by Diana, Princess of Wales in 1991.

The Kirsty Club was launched to expand and improve the service, with celebrity supporters of the appeal including Gloria Hunniford, Mohamed Al-Fayed, Davina McCall and opera singer Russell Watson.

After achieving 12 GCSEs and raising about £7.5 million ($10.5 million/€8.5 million) for charity, Kirsty was studying childcare at Manchester College with hopes of one day becoming a teacher when she died in October 2015 at the age of 20.

Words cannot describe how amazing this young lady has been over the years .. Kirsty has been defying doctors for many years and whilst doing that she has been raising millions of pounds for terminally ill children... I met Kirsty in 2002 when she became the nations and my good luck charm for the game against Greece , we also met the queen together in Manchester so you could say we have spent some amazing moments together over the years and it was an inspiration to meet such a brave young lady with so much drive for helping others.. My love and thoughts go to kirsty's parents and sisters as this inspirational young lady will be missed ... My heart and love goes to Kirsty for letting me be a small part of your world over the years.. Rest in peace ❤️❤️

Beckham described her as "amazing" and said she would be missed.

"Kirsty has been defying doctors for many years and while doing that she has been raising millions of pounds for terminally ill children," Beckham said.

"It was an inspiration to meet such a brave young lady with so much drive for helping others.

"I met Kirsty in 2002 when she became the nation's and my good luck charm for the game against Greece, we also met the Queen together in Manchester so you could say we have spent some amazing moments together over the years and it was an inspiration to meet such a brave young lady with so much drive for helping others.

"My love and thoughts go to Kirsty's parents and sisters as this inspirational young lady will be missed."

Others who had paid tribute included Watson.

He tweeted: "My inspirational friend Kirsty Howard is with the Angels. My heart is aching so much. RIP Angel forever xxxx."

Hundreds of mourners attended the funeral, including a number of celebrities.