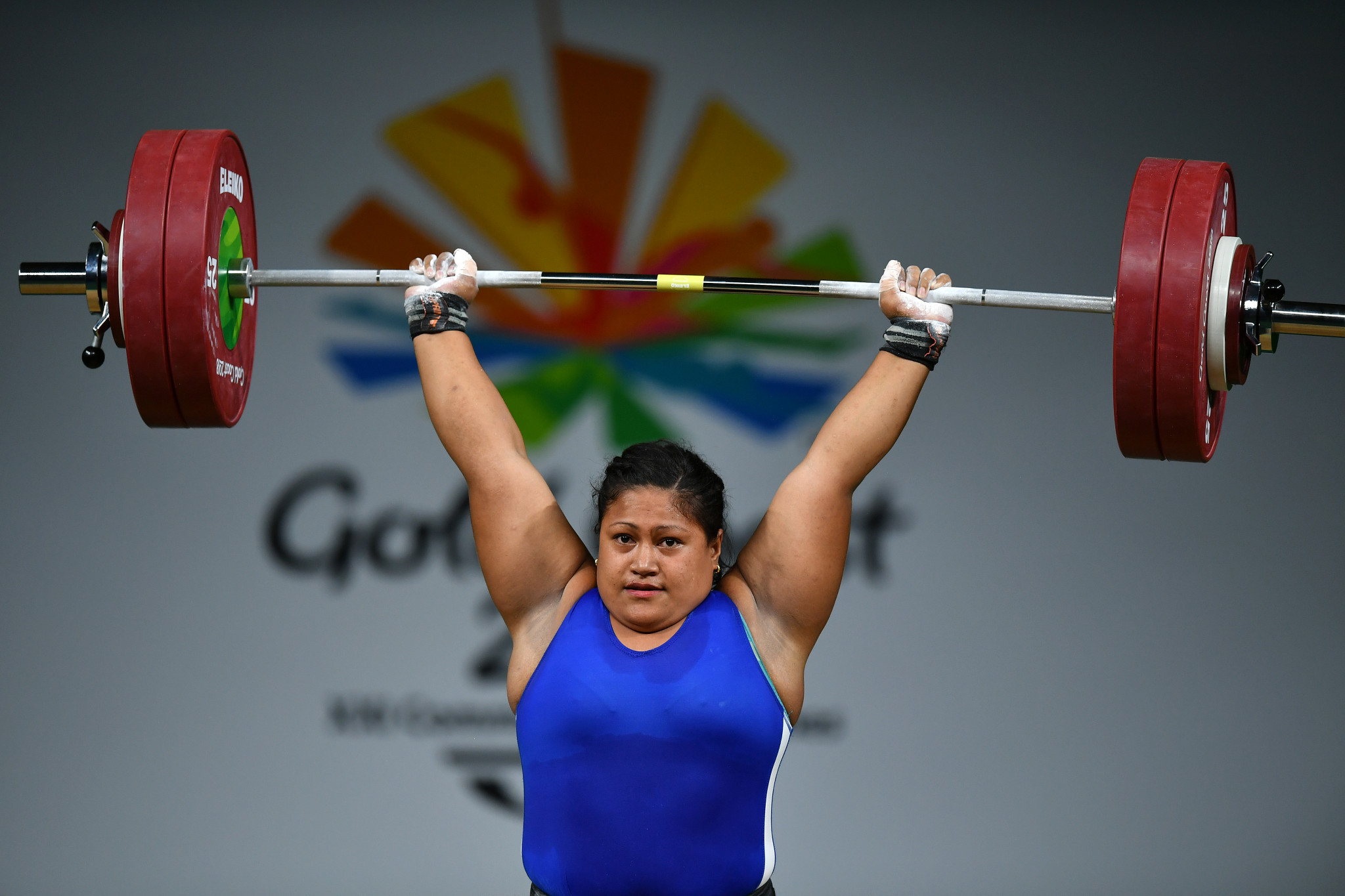 Stowers trailed leader Hubbard by 7kg after the snatch, but she went onto claim gold after her New Zealand rival pulled out of the competition with an injured left elbow.

New Zealand's Hubbard, the first transgender athlete to compete at the Commonwealth Games, was expected to win the event easily.

She withdrew after hurting her arm on her final snatch, which saw her miss her attempt at a Commonwealth record of 132kg and twist her elbow as she dropped the bar behind her.

Hubbard left the platform in pain and received treatment in the 10-minute break prior to the clean and jerk round.

"I never thought I could compete against Laurel because of her high total," she said.

"After the snatch when she pulled out, all I did was focus on each lift and try to do the best I could on the platform.

"I was very shocked when she withdrew after the snatch.

"It meant I was in the lead and I knew I had a good chance of the gold medal."

Samoan team official Mary Opeloge said it was unfair for Hubbard to compete.

"I hope everyone noticed [that it was unfair]," she said.

"But all Feagaiga wanted to do was her best."

Her final clean and jerk lift at 142kg took her above England’s Emily Campbell, who finished third with 242kg.

Hubbard was eligible to compete at Gold Coast 2018 because she passed the International Olympic Committee criteria for transgender athletes after proving her testosterone levels stayed below certain levels in the 12 months leading up to the event.

Despite her disappointment, she said she has no regrets.

"It's obviously a difficult time," the 40-year-old added.

"But the one thing I am happiest about is that I tried to reach for my best performance.

"This happens sometimes, but that's the sport.

"We can always go back over these things in our heads, but the truth is that unless we try to be the best person we can be, the best athlete, then really we are not being true to sport.

"I am happy with the decisions I made today.

"I have no regrets.

"Medals are only one measure of performance.

"I am obviously unhappy I had to withdraw, but I gave it everything I had and I can sleep well knowing that."

The 32-year-old recorded a total of 360kg to beat nearest challenger Pardeep Singh of India by eight kilograms, despite him failing with his last clean and jerk attempt at 211kg.

Mao managed 154kg in the snatch and 206kg in the clean and jerk.

"I'm so happy to win a gold medal - the first gold for my team and my country," Mao said.

"We had a fight, it was tough.

"I fought for me, for my country, and for my gold medal."

Singh had the opportunity to clinch the gold medal with his last clean and jerk attempt but failed at 211kg.

He also failed with his second clean and jerk attempt at 209kg, which would also have been enough for victory.

Singh finished with a total of 352kg, comprising 152kg in the snatch and 200kg in the clean and jerk.

Rounding out the podium was England’s Owen Boxall with a total of 351kg.

Kiribatia's defending champion David Katoatau, known as "The Dancing Weightlifter" for his funky moves after successful lifts, finished fifth with a total of 340kg.

Eileen Cikamatana came out on top in the women’s 90kg event, which was held at the same time as the women’s over 90kg, to secure Fiji’s first gold medal of Gold Coast 2018.

Her total was made up of 104kg in the snatch and 128kg in the clean and jerk.

She managed 101kg in the snatch before posting 125kg in the clean and jerk.

His overall tally, which was made up of 174kg in the snatch and 229kg in the clean and jerk, beat the previous mark of 400kg set by Canada's George Kobaladze at Glasgow 2014.

Samoa's Lauititi Lui was the joint leader after the snatch with 175kg, but he could only manage 225kg in the clean and jerk and had to settle for the silver medal with 400kg.

The 22-year-old collapsed backwards on the platform after failing with his last clean and jerk attempt at 228kg.

Clutching his leg, he was taken from the platform in a wheelchair after a delay of several minutes.

Lui received his silver medal in the wheelchair, which Liti pushed for him.

Liti's victory was confirmed when Butt failed with his last clean and jerk attempt at 231kg.

Gurdeep Singh of India finished in fourth place, despite sharing the lead with Lui after the snatch.

Nauru's Itte Detenamo was widely believed to be a contender for the medals, but he missed all three snatches at 160kg and was eliminated from the competition.