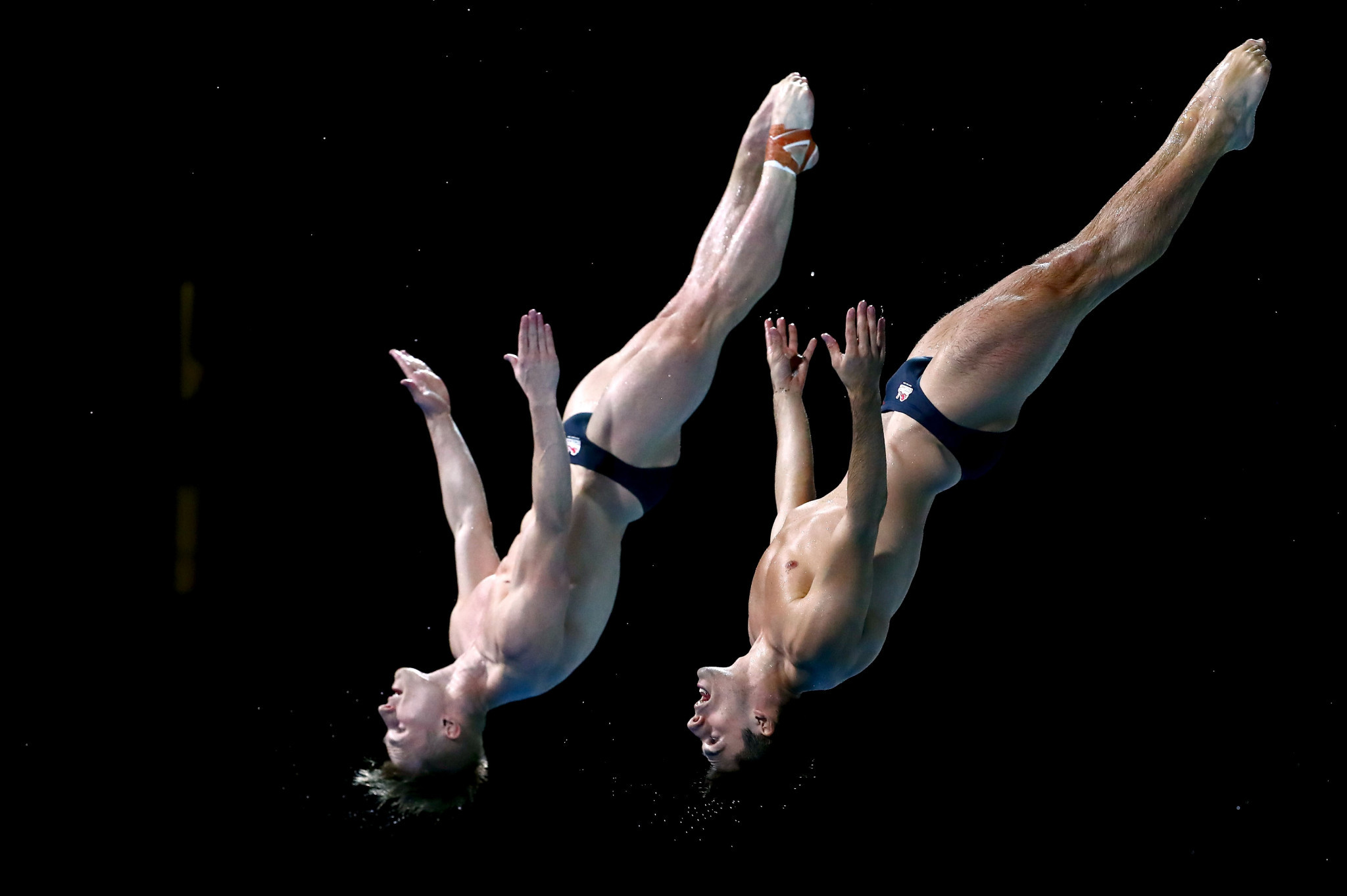 It gave Laugher his third gold medal of these Commonwealth Games.

The pair representing England produced a series of high quality dives, here today, to defend the title they earned at Glasgow 2014.

Outside the medal positions after the first two rounds of competition, their higher difficulty in the remaining four dives saw them move to the top of the standings and away from their rivals.

The highlight came in the fifth round when they score 92.43 points with a forward two-and-a-half somersaults and three twists.

Mears and Laugher finished the competition with a total of 436.17 points, giving them a clear victory over their nearest challengers.

It also gave Laugher a third gold medal of Gold Coast 2018 and a fifth Commonwealth Games title in total, having already won the individual 1m and 3m springboard competitions.

The silver medal was earned by Canada's Philippe Gagne and Francois Imbeau-Dulac following an impressive series of dives earned them 415.23 points.

The bronze medal went to Australia's Domonic Bedggood and Matthew Carter, who ended on 408.12 points.

The English pairings proved evenly matched after the first two dives of the competition but Dixon and Williams edged ahead in the in the third and fourth rounds.

The key dives cam in the fifth round when Goodfellow and Daley, who pulled out of his individual event with a hip injury, scored 90.72 points with well executed a backwards three-and-a-half somersaults.

Dixon and Williams faltered in their response with their effort only scoring 65.70 points, giving their compatriots a strong advantage.

A strong final dive ensured Daley and Goodfellow of victory, the pairing ending on a score of 405.81 points.

It gave Daley a fourth Commonwealth Games gold medal, following two victories at Delhi 2010 and one at Glasgow 2014.

An English one-two was completed by Dixon and Williams, who achieved a total of 399.99 points.

The podium was completed by Australia’s Declan Stacey and Bedggood, the home pairing managing 397.92 points.

Grace Reid secured Scotland’s first diving gold medal since 1958, which had been won by the late Sir Peter Heatly, the long-time chairman of the Commonwealth Games Federation.

Heatly’s grandson James ended the country’s wait for a medal of any colour in diving when he won bronze in the men’s one metre springboard event two days ago.

Reid went further in the women’s as a consistent series of five dives saw her stand on top of the podium.

The lead changed hands in the opening three rounds with England’s Alicia Blagg, Reid and South Africa’s Julia Vincent all taking their turn at the top of the standings.

While Blagg and Vincent faltered with errors dropping them down the standings, Reid scored over 50 points with each of her dives to head into the final round with a strong lead.

She sealed victory with another solid dive, ending on a total of 275.30 points.

Reid enjoyed a winning margin of over 10 points, with Australia’s Georgia Sheehan taking the silver medal on a score of 264.00.

Her team-mate Esther Qin, the top qualifier, struggled in her early dives but rose up the standings to score 252.95 points for the bronze medal.