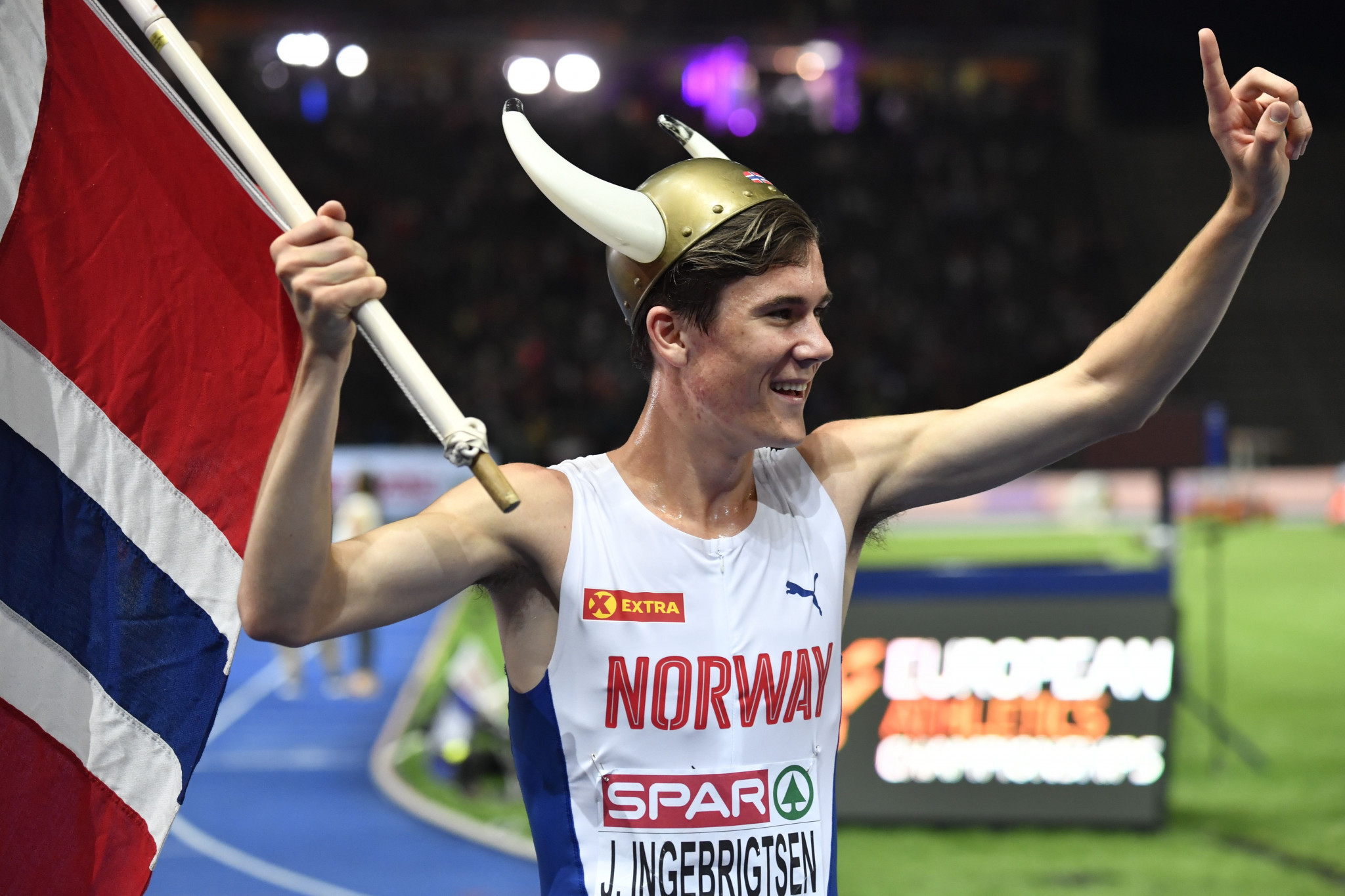 Norway’s 17-year-old Jakob Ingebrigtsen transformed himself from prodigious junior to astounding senior here tonight as he took on a classy 1500 metres field including elder brothers Henrik and Filip, respectively the 2012 and defending champion in this event, and pulverised it.

It was the highlight of one of the most exciting nights of athletics in the history of these Championships, with world and Olympic heptathlon champion Nafissatou Thiam winning a titanic heptathlon battle with Britain’s world indoor and Commonwealth champion Katerina Johnson-Thompson, and France’s Pascal Martinot-Lagarde reversing history to defeat Sergey Shubenkov by two thousandths of a second in the 110m hurdles.

When the youngest Ingebrigtsen on show led his two siblings through the bell it seemed as if he might be hoping to see one or other through to a second title - but Jakob kept on running as if it was the easiest, most obvious thing in the world.

As the field reached the final straight he lengthened his stride, pinned his ears back and set off for the gold like a dog fetching a stick.

But the story was not to be changed, and Family Ingebrigtsen was able to celebrate its third European 1500m champion.

Ingebrigtsen, who took 5,000m bronze and 1500m silver at last month’s International Association of Athletics Federations World U20 Championships in Tampere, won in 3min 38.10sec, with Lewandowski clocking 3:38.14 and Wightman claiming himself another major medal in 3:38.25.

Henrik Ingebrigtsen just missed the podium, finishing fourth in 3:38.50, while Filip slipped back to second last in 3:41.66 after being badly spiked on the run-in.

"I was wondering if I missed a lap or something," said the bemused young champion in the immediate aftermath.

Martinot-Lagarde, that most mercurial of athletes, was for once unable to speak last night as, wrapped in the flag of France, he was asked by the man in the middle to reflect upon his victory over a friend and rival.

Both had come through the line together, with the Russian falling after his final lean.

It was an extraordinary reversal of fortunes from four years ago, when Martinot-Lagarde, having set a French record of 12.95, arrived at the Zurich European Championships as favourite, only to lose out to Shubenkov, who would take the world title in Beijing 12 months on.

This year it has been Shubenkov, running as an Authorised Neutral Athlete, who has set the pace, breaking 13 seconds on three occasions last month, with a best of 12.92 that meant that Colin Jackson’s then world and now European record of 12.91, set in 1993, was a big target.

Martinot-Lagarde, by contrast, has made slow and stuttering progess this season as he has workedto regain fitness from injury.

But while he might not have made the most of his talents on some previous occasions, he got every iota of speed out of himself here tonight.

While his younger compatriot Jakob Ingebrigtsen ended the night wearing a Viking helmet, there were no similar celebrations this time for world 400m hurdles champion Karsten Warholm, whose bid to add the European 400m title to the one he has already earned her over the barriers turned out to be a challenge too far as Britain’s 23-year-old Matthew Hudson-Smith fulfilled his obvious huge potential to take a first major individual title in 44.78.

Hudson-Smith, a relay gold medallist in Zurich four years ago, has thus earned his first big individual title. In so doing he has compounded a proud British tradition which began in 1938 with Godfrey Brown and took in en route Derek Pugh, John Wrighton, Robbie Brightwell, David Jenkins, Roger Black. Duaine Ladejo, Iwan Thomas - whose 21-year-old British record of 44.36 is surely tantalising Hudson-Brown right now - and Martyn Rooney, who made an unsuccessful defence of his title here.

The silver went to Belgium’s Kevin Borlee in 45.13, with twin brother Jonathan claiming bronze in 45.19.

What a night for siblings…

Thiam had arrived at the seventh and final discipline having taken over from the Briton in the gold medal position thanks to a heptathlon Championship best javelin throw of 57.91 metres with her third and final effort, claiming 1,014 points to total 5,984.

Johnson-Thompson, whose long jump victory with 6.68m earlier in the day had extended her lead to 113 points, had produced a personal best of 42.16m to earn 709 points, but it was the Belgian who led, by 192 points going into the 800 metres.

But how would it play out?

Despite winning the race in 2:09.84, almost 10 seconds clear of the second-last placed Thiam, it was not quite enough for Johnson-Thompson.

"I gave it my all in this last event, so I'm very happy," said Johnson-Thompson.

"It was a very hard competition.

"To be honest, I left it all on the track, but I'm not easily intimidated.

Thiam commented: "Everything was in the head in this competition.

"It was fight until the end of the competition and I had to fight with myself too."

Germany expected one javelin gold in this Stadium - but it will end with two thanks to a Championship record effort of 67.90m which secured the title for home thrower Christin Hussong.

Double world high jump champion Mariya Lasitskene added European gold to the silver she won four years ago - and she could not have looked less happy about it.

The Authorised Neutral Athlete won on countback from Bulgaria’s Mirela Demireva, who had gambled on passing at 1.96m and 1.98m, during which heights all other opposition disappeared, and returned to match Lasitskene’s clearance of 2.00m, equalling her personal best, at her third attempt.

But there were no celebrations for the new champion, whose face was dark as she resumed her seat, punching the canopy alongside it before flinging down her back and slumping in her seat with head in hands

"I won but I am upset," Lasitskene said.

"We expected much better jumps and much higher result.

"If you want to congratulate me, it is okay, but I cannot celebrate after this event,"