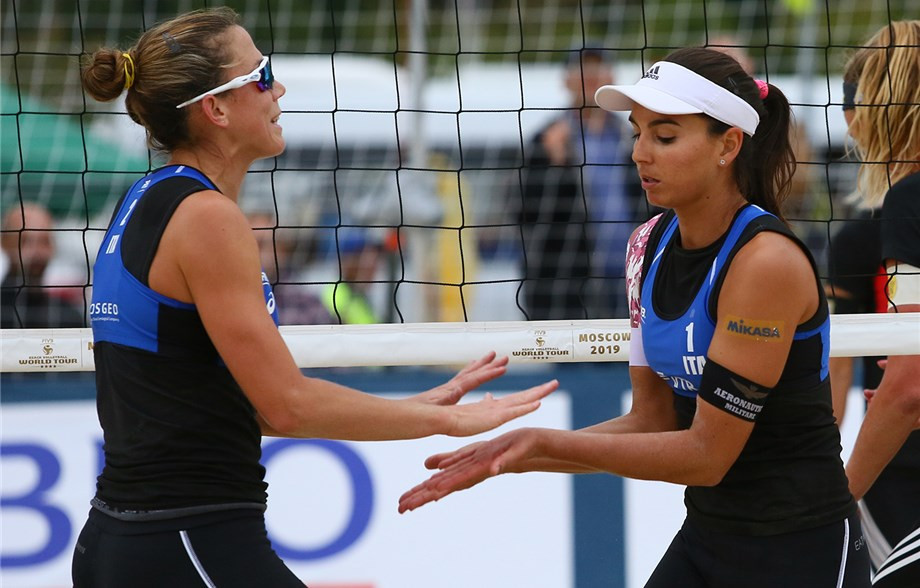 Eight pairs earned their places in the women’s quarter-finals at the International Volleyball Federation (FIVB) Beach World Tour event in Moscow today and two of the players, Italy’s Marta Menegatti and the United States' Sarah Sponcil, did so on their birthdays.

Sponcil and partner Kelly Claes, the sixth seeds, cruised to an emphatic 21-16, 21-9 victory over Slovakia’s Andrea Strbova and Natalia Dubovcova to make the last eight of the four-star tournament at the Russian's capital's Luzhniki Olympic Complex.

"It was a good win, kind of hard, because we had the entire day to rest, while the team that we played had a match that they had already played," Sponcil, who turned 23 today, said.

"They were definitely warmed up, but I think we came out really strong.

"At the very beginning I didn’t feel very warmed up, so maybe that’s something that we can work on, but towards the middle of the first set we got some energy going and got some good side-outs.

"That’s all I wanted today and I am really excited.

"My friends and I are going out to dinner and try to celebrate as much as we can, but making sure we’re ready for tomorrow as well."

Victory did not come as easy for 29-year-old Menegatti and partner Viktoria Orsi Toth, the 16th seeds, as they had to fend off multiple match points for their German opponents Laura Ludwig and Margareta Kozuch in a nail-biting second set of their encounter before eventually triumphing 17-21, 33-31, 15-11.

"I don’t remember how many match points there were in the second set, but it was crazy," two-time Olympian Menegatti said.

"We enjoyed it a lot, but I think our coach did much less than us.

"This was a great match not only for us, but also for our opponents."

Next up for Sponcil and Claes are Switzerland's Joana Heidrich and Anouk Vergé-Dépré, who beat The Netherlands' Joy Stubbe and Marleen Ramond-van Iersel 28-26, 21-17 and Czech Republic's Barbora Hermannová and Marketa Slukova 21-15, 21-10 on their way to the quarter-finals.

Standing between Menegatti and Orsi Toth and a place in the semi-finals are 17th-seeded Brazilians Taiana Lima and Talita Da Rocha Antunes, who are the lowest-ranked team still in contention.

Among those through are defending champions Jānis Šmēdiņš and Aleksandrs Samoilovs of Latvia after they followed up a 21-19, 21-16 victory over Spain's Pablo Herrera Allepuz and Adrián Gavira Collado by beating home favourites, top seeds and reigning world champions Viacheslav Krasilnikov and Oleg Stoyanovskiy 21-19, 23-25, 15-12.

They will go onto face another Russian duo, Nikita Liamin and Taras Myskiv, who defeated Switzerland's Adrian Heidrich and Mirco Gerson 16-21, 21-19, 15-12 in the last 16.