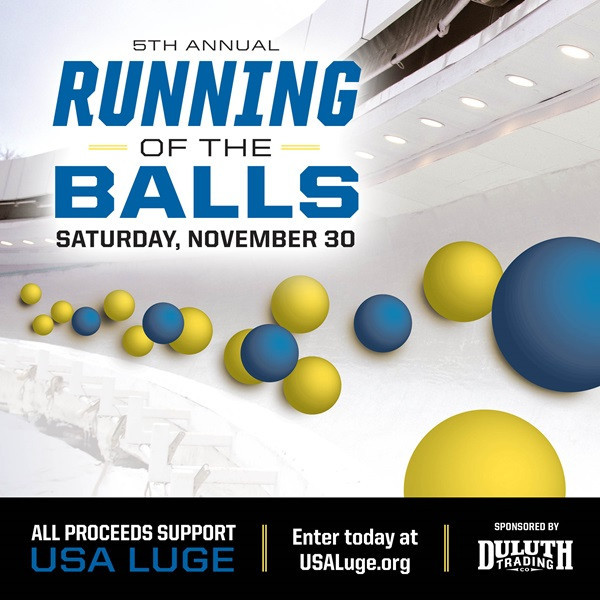 The prizes for USA Luge's fifth annual "Running of the Balls" fundraiser have been announced by title sponsor Duluth Trading Company.

The event is due to take place in Lake Placid on Saturday (November 30), immediately following the conclusion of the first day of racing at the International Luge Federation (FIL) World Cup.

After the completion of the women's race, more than 1,000 lacrosse balls - donated by Summit Lacrosse Ventures - will negotiate the nearly one-mile Mount Van Hoevenberg track.

Duluth Trading Company, the official off-sled outfitter for USA Luge, will award merchandise and cash prizes for the event, which directly supports the USA Luge team's athletes and programmes.

In terms of merchandise, the top prize is a lifetime leather travel duffle bag and "Buck Naked" underwear.

Merchandise will also be awarded all the way down to tenth place.

"We are proud sponsors of USA Luge and are excited to partner with the team for such a fun and interactive fundraiser like Running of the Balls," Ricker Schlecht, vice-president of product and creative at Duluth Trading Company, said.

"As the official off-sled outfitter, we're thrilled to bring our brand to life in another way onsite at this year’s World Cup, and we look forward to cheering on the team this season."

There will be a race within a race as a collection of blue-colored lacrosse balls will roll down the Olympic Sports Complex sliding track simultaneously with the yellow and white.

The two concurrent events were said to be very popular last year, when the blue race debuted.

The additional race of blue lacrosse balls will give the owner of the fastest ball a free trip to the 2020 FIL World Championships in Russian city Sochi, courtesy of Bucket List Events, the official hospitality partner of USA Luge.

"This has become a really great fun event for the fans and for us at USA Luge," Gordy Sheer, USA Luge's director of marketing and sponsorships, said.

"Now we'll do it again for the fifth time in front of the World Cup audience at the track with not one, but two simultaneous events.

"Having Duluth Trading Company partner with us certainly makes this even better.

"All money raised will help defray the costs for our athletes at all levels of competition, from the national team down to the development teams."