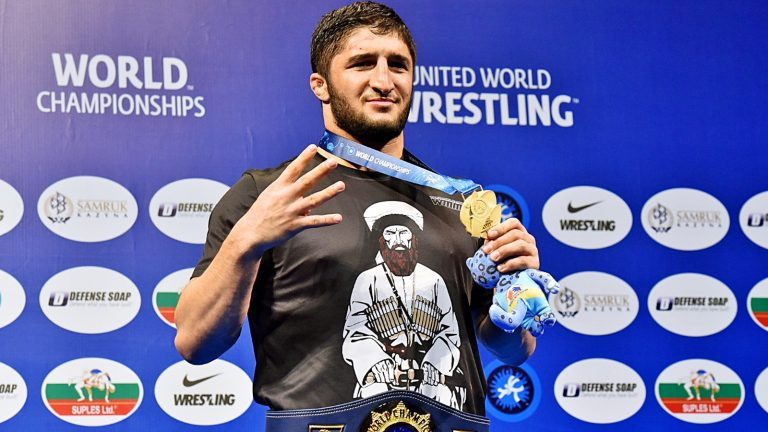 Russian freestyle wrestler Abdulrashid Sadulaev has been suspended for four months after failing to adhere to a ban on wearing non-national team outfits during an award ceremony at this year's World Championships.

Having retained his 97 kilograms title on the final day of the event in Kazakhstan’s capital Nur-Sultan in September, Sadulaev arrived at the award ceremony donning a tee-shirt with an image of Imam Shamil, the political, military, and spiritual leader of Caucasian resistance to Imperial Russia in the 1800s.

According to the rules of United World Wrestling (UWW), ceremonies can only be entered in the outfit of a national team.

As reported by riaderbent.ru, Sadulaev admitted that he did not know about the rule and described Shamil as being a great personality and role model.

According to TASS, the 23-year-old’s suspension will expire on January 21, fourth months after the offence occurred.

Sadulaev became a four-time world champion with his triumph in Nur-Sultan, having claimed the 86kg crown in 2014 and 2015 before securing his first success at 97kg in 2018.

He earned a 4-0 victory over Azerbaijan’s two-time Olympic medallist Sharif Sharifov at the Barys Arena in what was the concluding contest of the event.

The Russian is also the reigning Olympic champion at 86kg and a three-time European champion.