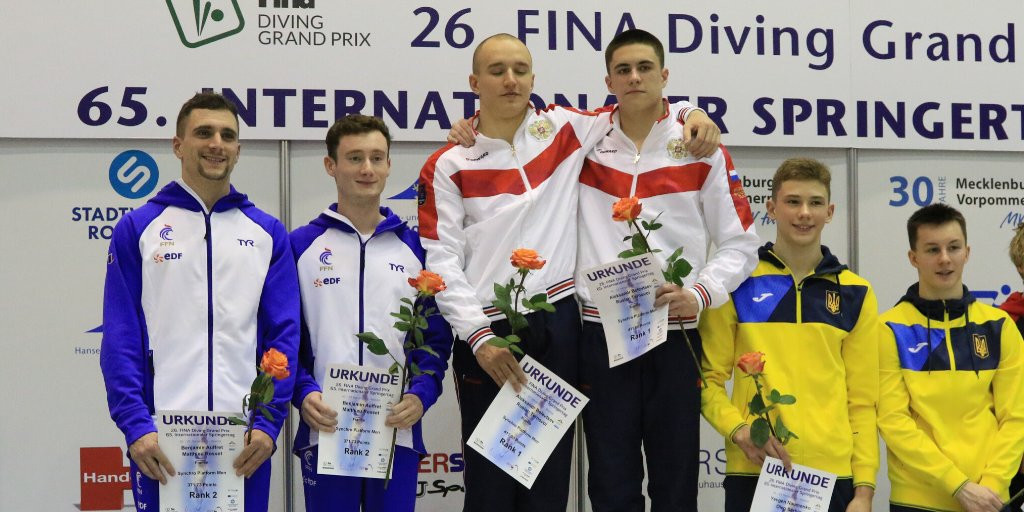 Russia took gold by a huge distance in the men's synchronised 10 metres platform on day two of the International Swimming Federation (FINA) Diving Grand Prix at the Internationaler Springertag Rostock in Germany.

Russia’s Ruslan Ternovoi and Aleksandr Belevtsev had no trouble with difficult routines to win by more than 39 points with a score of 411.00.

French pair Matthieu Rosset and Benjamin Auffret were the closest competitors, finishing second, however it was incredibly tight for the other two medals.

Less than four points behind were the bronze medallists, Oleg Serbin and Yevgen Naumenko of Ukraine, who finished narrowly ahead of Britain’s Lucas Thomson and Benjamin Cutmore.

Only 20 points separated second from seventh in a very close competition.

Chinese divers, who excelled in last year's FINA Diving Grand Prix, were once again absent as a result of the coronavirus outbreak.

Day 2 of finals in @gprostock are underway and @Brooke_Schultz1 has already snagged 🥇 in the 3m! 🇺🇸🙌 pic.twitter.com/OWNi6ehUnZ

The men’s synchronised 3m springboard was won by less than four points by the German duo of Lars Rüdiger and Patrick Hausding, with a total score of 395.79.

Americans Michael Hixon and Andrew Capobianco had a greater degree of difficulty in their routines but could not execute them as cleanly as the winners, giving them the consolation silver medal.

The podium was rounded out by Polish pair Andrzej Rzeszutek and Kacper Lesiak, who won bronze by a comfortable margin.

In the women’s 3m springboard final, no one looked capable of stopping the United States’ Brooke Schultz as she won comfortably with a score of 314.10.

The silver and bronze positions were close - Germany’s Tina Punzel was less than three points ahead of Anna Pysmenska of Ukraine, who took the final medal on the podium.

TOP STORY: New Zealand House for Birmingham 2022 to be based at Edgbaston Golf Club