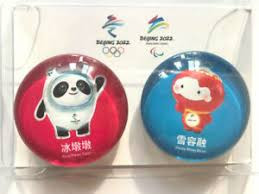 Beijing 2022 claims it has suffered only a small dip in sales of merchandise during the coronavirus crisis that has gripped China.

So far, more than 1,600 licensed derivative products have been launched in the domestic market.

They feature elements relating to ice and snow sports, and include some Chinese characteristics.

Pens made with recycled material like mineral water bottles have proved especially popular with customers.

There were 5,000 pieces as part of a limited edition.

But, by August, the entire stock at a store in Wangfujing Street in Beijing was sold out, according to China Daily.

The mascots, Bing Dwen Dwen, a panda for the Olympic Games, and Shuey Rhon Rhon, a lantern-like cartoon child for the Paralympics, have, as you would expect feature heavily on merchandise.

A limited edition of 3,000 commemorative pin badges of Bing Dwen Dwen and Shuey Rhon Rhon was designed for the Lantern Festival, the 15th day of the Lunar New Year, which fell on February 8 this year at the height of the coronavirus crisis which started in China and has affected more than 100,000 people there, killing over 4,200.