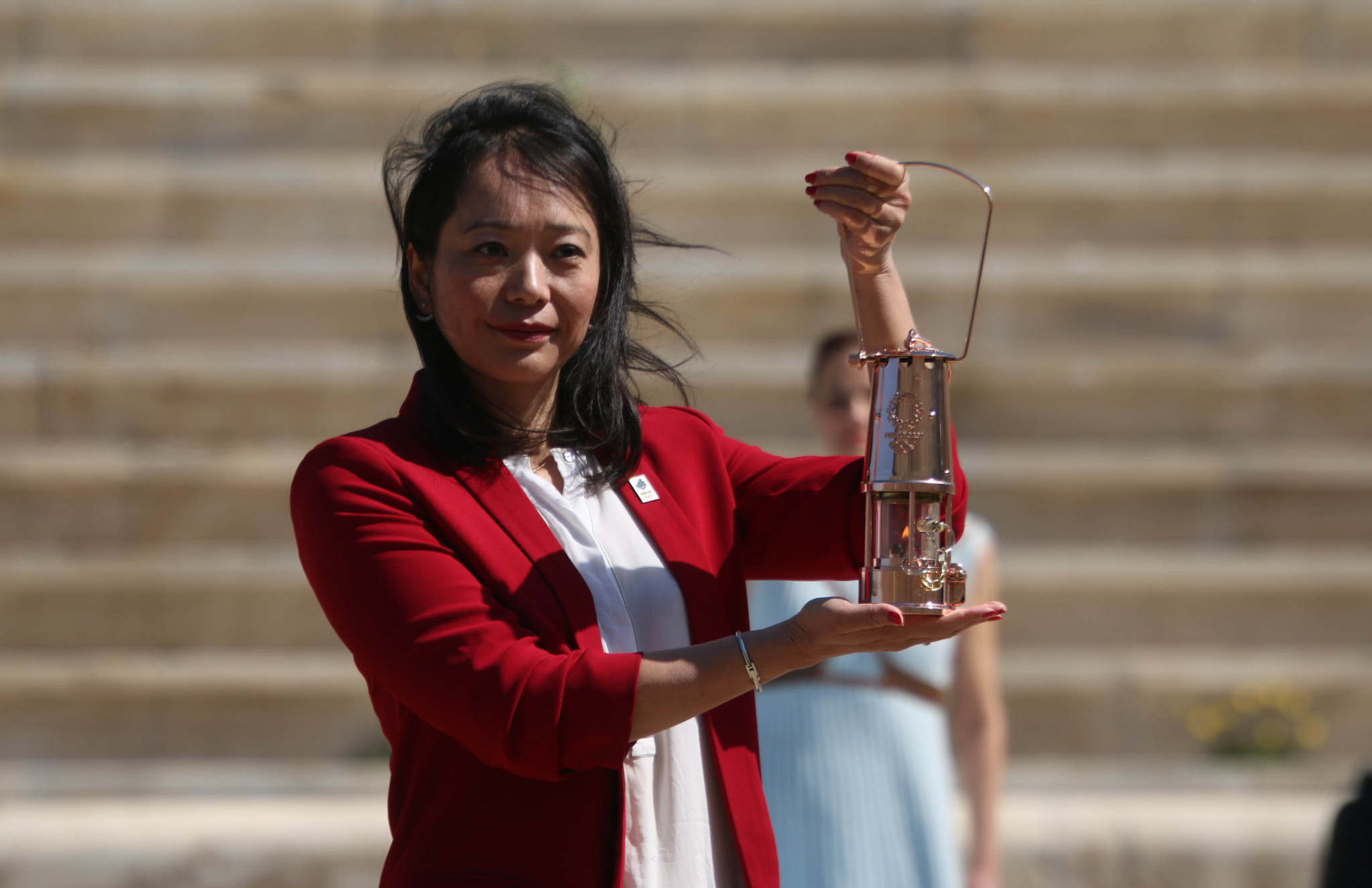 Swimming Olympian Naoko Imoto received the Olympic Flame on behalf of Tokyo 2020 at a shortened ceremony at the historic Panathinaiko Stadium in Athens.

The event, which was scaled back considerably due to coronavirus, took place in sunshine under a blue sky in the Greek capital, the "City of Light", as the Flame was formally handed over to Tokyo.

Wearing a jacket in cherry red, the national colour of Japan, Imoto received the Flame from Hellenic Olympic Committee President Spyros Capralos in the traditional symbolic moment which marks the transfer from Greece to the next host city.

Imoto, who swam at the 1996 Atlanta Olympics, was drafted in with less than a day's notice after Tokyo 2020 opted not to send an additional party from Japan to collect the Flame, as part of their measures against the spread of COVID-19.

She is currently living in Greece, where she works as head of education for the United Nations' children's agency UNICEF.

Tokyo 2020 President Yoshiro Mori was originally due to travel to Athens, but instead sent a message by video-link.

Tokyo Organizing committee representative Naoko Imoto has received the flame and it will now be transported to Miyagi prefecture in a specially designed #Tokyo2020 lantern. 🇯🇵#OlympicTorchRelay #UnitedByEmotion pic.twitter.com/963rIXeGtQ

He said the decision to cancel the delegation brought him a "sleepless night".

Judoka Tadahiro Nomura and wrestler Saori Yoshida, who are both triple Olympic champions and were scheduled to participate in the ceremony, were "getting in readiness for welcoming the Flame at Matsushima", Mori added.

Both Nomura and Yoshida also sent short video messages expressing their disappointment at missing the handover.

They each ended with the words "Hope Lights Our Way", the motto of the Tokyo 2020 Torch Relay.

Mori repeated the statement of the International Olympic Committee that "there is no need for drastic action such as a cancellation or postponement of the Games at this stage", with the Opening Ceremony scheduled for July 24.

At today's ceremony, held in the stadium which was used for the first Olympic Games of the modern era in 1896, Olympic gold medal winning gymnast Eleftherios Petrounias, and pole vault champion Katerina Stefanidi, both carried the Flame to represent Greece in a truncated Relay.

It was then lit in a gold ceremonial cauldron which had been placed in the centre of the stadium.

There was to have been a short performance of dance by ten priestesses, drawn from the company which had attended the lighting of the Flame in Ancient Olympia a week ago, but this was reduced to a procession led by choreographer Artemis Ignatiou and high priestess Xanthi Georgiou.

"We deeply regret that our Japanese friends have been unable to join us but under no circumstances has the flame lost its brightness.

"We hand over the flame in the spirit of friendship."

No spectators were permitted as a precaution against the spread of coronavirus, but the event was live-streamed.

The Flame will be carried in a miner's safety lamp for the duration of its flight to Japan.

The "Tokyo 2020 Go" plane is scheduled to land at the Matsushima air base tomorrow, local time.

Japan's domestic Relay begins on March 26 with the grand start in Fukushima, a region devastated by the 2011 earthquake and tsunami.

It is scheduled to visit all 47 Japanese prefectures in a journey which organisers insist will go ahead as scheduled, and last 121 days.

However, the grand start and arrival and departure ceremonies for the Flame will take place without an audience present.

Spectators will still be able to watch from the roadside, but have been asked not to do so if they are feeling unwell.

Torchbearers will not be allowed to run if they have a high temperature.