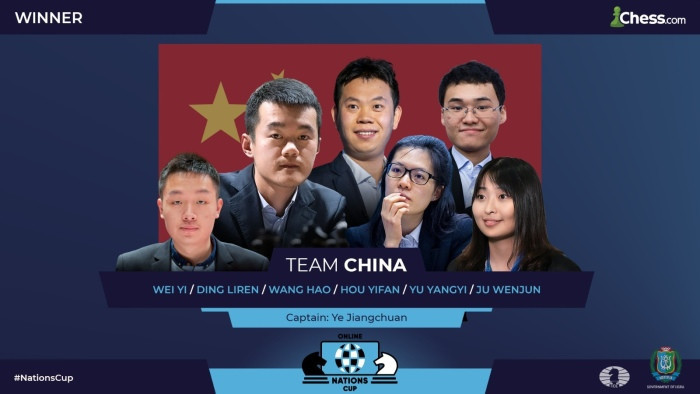 China took the title in the International Chess Federation (FIDE) Online Nations Cup thanks to a superior round-robin performance, after their superfinal against the United States ended in a 2-2 draw.

After winning the round-robin stage by four points, China knew that if the superfinal ended level, they would triumph in the overall competition.

The superfinal was contested over four matches, with the first game halved between Hikaru Nakamura of the US and Ding Liren of China.

The second game was also halved between Irina Krush of the US and Hou Yifan of China.

Game four saw Fabiano Caruana of the US overcome Wei Yi, but it proved only a consolation victory in the final standings.

The Superfinal match against USA ended in a draw 2-2 but it was enough for China as they won the round-robin stage. https://t.co/0GQybGZHkD#NationsCup #chess #China pic.twitter.com/bzknZyWbUu

The other two members of the winning Chinese team, who did not play in the superfinal, were Wang Hao and Ju Wenjun, with the team captained by Ye Jiangchun.

Matches were played using the rapid format, with each player starting the game with 25 minutes on their clock, while 10 seconds of extra time were added after each move.

Players were observed during matches by FIDE affiliated international arbiters by a video conference call to ensure fair play.

The online tournament ran over six days and was broadcast live on FIDE and Chess.com's own social media channels.

Commentary was provided by chess experts in multiple languages.

Other participating teams in the competition were Europe, Russia, India and a Rest of the World team.