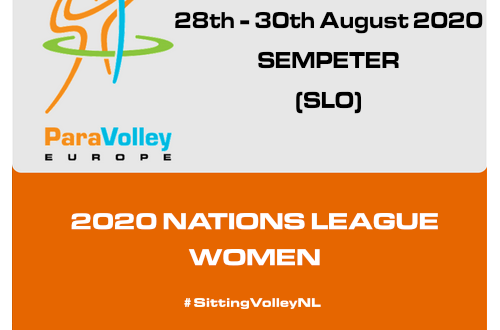 ParaVolley Europe has approved the launch of a Nations League competition for women’s teams following the postponement of the Tokyo 2020 Paralympic Games.

Competition would take place between August 28 and 30 in Slovenia, with teams arriving in the country in the three days prior to the tournament depending on the number of athletes requiring classification.

ParaVolley Europe said it will continue to monitor the status of the competition, with reviews scheduled for June 15 and July 15.

A final review will be made on August 10, where the competition would officially be confirmed.

ParaVolley Europe added that should any signs of coronavirus infection be detected after teams’ arrival, the competition will be halted and teams will be refunded for the nights they had not spent in Slovenia.

As part of conditions set out by the Slovenian Government, the competition would take place without spectators and no Opening or Closing Ceremony would be held.

Teams would be kept separate in the competition hall until the start time of games, with participants asked to shower in their respective hotels.

Each team will be located in a different hotel to reduce unnecessary contact, with teams travelling by bus to ensure athletes do not mix with other teams.

Teams have been requested to bring one referee from their country to officiate, but should this not be possible the team would be invoiced for referee’s costs.

ParaVolley Europe has asked teams already registered to confirm they can still attend the competition as soon as the situation in each nation allows them to do so.

Countries should notify the governing body no later than June 15.

A technical meeting with the registered teams’ official representatives will be organised for the end of June over video.

ParaVolley Europe said the safety of our athletes, officials and local organisers is of paramount importance, with the organisation vowing to make sure everybody is safe and welcome in the right conditions.

TOP STORY: RUSADA confirms it will not appeal against two-year sanction imposed by CAS