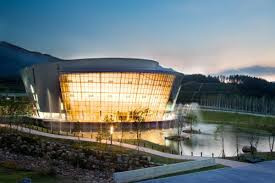 Work to construct a new "taekwondo village" is due to begin at the end of this month in Muju in South Korea.

The new facility will be built around the Taekwondowon, the bespoke venue for the sport which hosted the 2017 World Championships.

Coming in at an estimated price of ₩9.5 billion (£6.3 million/$7.8 million/€7 million), the village will include a "community centre" for taekwondo training, according to South Korean news agency Yonhap.

A healing therapy centre, a taekwondo experience centre and an outdoor cultural space are also part of the plans.

The community centre will include a space for elderly taewkondo athletes, it is reported, while athletes from overseas will also be accommodated.

"Forest baths" will be available in the healing centre, allowing guests to experience the "therapeutic effect" of nature.

The village is expected to be completed by next year and will cover an area measuring 53,000 square metres, Yonhap said.

Muju is considered an important centre for the sport, which is a major part of Korean culture.

Other up-and-running taekwondo attractions are in the city already.