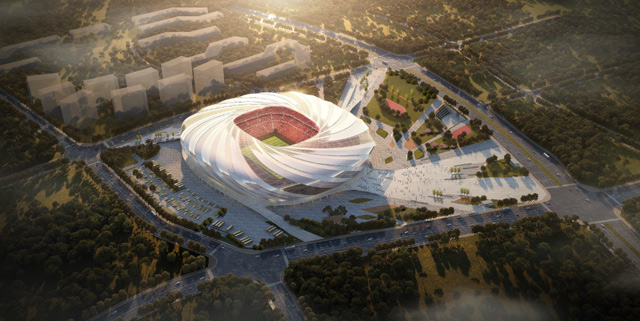 Construction work is ongoing on six stadiums for the 2023 Asian Cup, organisers in China have announced.

China was awarded the tournament last June having been the sole bidder for the event, after the Korean Football Association (KFA) withdrew from the race to focus on its ultimately unsuccessful attempt to secure the hosting rights for the 2023 Women's World Cup.

India, Indonesia and Thailand had previously indicated they would bid for the tournament but all three pulled out.

Organisers of the 2023 Asian Cup confirmed work has begun on four new stadiums in Chongqing, Xi'an, Xiamen and Suzhou.

The confirmation means construction work is ongoing at six venues which will be used for the tournament, with progress having already been made at facilities in Shanghai and Chengdu.

The 37,000 capacity Shanghai Pudong Professional Football Stadium is expected to be completed by the end of this year, with work having begun back in 2018.

The Chengdu Phoenix Mountain Professional Football Stadium, a 57,087-capacity venue, should be completed during the first half of 2021.

Construction is also expected to begin on venues in Dalian and Qingdao at the end of this year.

The Chinese Football Association has said the venues will feature different designs and concepts, but will meet the requirements of the Asian Football Confederation to host the competition.

"By hosting the 2023 China Asian Cup, it will leave a more valuable legacy for Chinese football, especially the completion and commissioning of 10 professional football stadiums with world advanced levels," said Shi Qiang, 2023 Asian Cup secretary general, according to the Chinese news agency Xinhua.

“It will greatly improve the infrastructure of Chinese football."

A total of 10 cities are expected to host matches during the tournament.

The stadiums will be comprised of new venues and upgraded facilities, with the existing Beijing Workers' Stadium and Tianjin Binhai TEDA Football Stadium set to be expanded prior to the Asian Cup.

China last staged the AFC's flagship competition in 2004, where they finished as runners-up after losing the final to Japan.

Hosting the 24-team Asian Cup could be a precursor for a bid from the country for the 2030 FIFA World Cup.