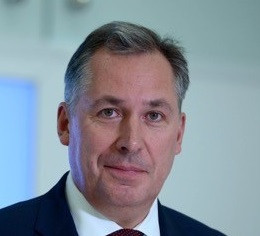 This year we celebrated the 40th anniversary of the 1980 Moscow Olympic Games. For our country and a whole generation, that had been a major sports event.

We expected to celebrate the anniversary in the best traditions of Olympism and its unifying power, which is considered essential for sport. We have been preparing thoroughly, inviting our friends and colleagues, members of the Olympic family, participants – winners and medallists of the 1980 Olympics from all continents.

But unfortunately the pandemic forced us to revise our plans and redesign the anniversary celebrations. We’ve been making every possible effort to help everyone realise and remind them about the unique legacy of the 1980 Olympic Games through offline (as far as possible) and online activities.

For many those Games had become a landmark event. And I have bright childhood memories of that. In fact, it was during the 1980 Olympics, when I committed my life to the world of sports forever. In 1980 we lived in Novosibirsk and I remember how the whole family gathered in front of a TV to watch the competitions.

At that time, I was seven years old and before that moment I didn’t realise that events with such a uniting power existed at all. This has influenced greatly my future life. In the autumn of 1980 my parents who came from a medical background and had nothing to do with sports decided to take me to a swimming club where I started to train. After two years I switched to the Fencing School of Olympic Reserve, which was also a part of the 1980 Olympic Games legacy.

The most important thing for us, at the Russian Olympic Committee (ROC), was to reach out to the wider audience and more importantly – the younger generation, to show how the Moscow Olympics were organised and held back in 1980, and to show something they can hardly ever witness nowadays. We wanted to demonstrate, that those Games were a huge and truly multicultural event.

As part of the celebrations from July 19 to August 3 we ran a massive project on the ROC social media channels where sports enthusiasts could learn a lot and find out fascinating facts about the 1980 Games, recollect the champions and medallists, and of course experience the unique atmosphere of 1980 Moscow.

I’m delighted that we had a special design for this project. We tried to submerge a contemporary audience of users and spectators into the environment of the 1980 Olympic Games with the help of digital instruments.

One of the project’s distinctive features were live streams of key events of the 1980 Moscow Olympics. People had an opportunity to dive into the atmosphere of the Games thanks to a very authentic broadcast of the competitions. More than 24,000 followers watched the Opening Ceremony of the Games on July 19. On August 3, around 10,000 sports enthusiasts watched the Closing Ceremony.

Fans also had a chance to enjoy exclusive archive photos and videos that were made public for the first time. Every day we told stories of the Olympic heroes and the medals they had won. Furthermore, as part of the project, we organised an Olympic quiz. Handball Olympic champion Vladlena Bobrovnikova and two-times volleyball European champion Irina Koroleva answered questions about the 1980 Moscow Olympic Games.

A simulated football game for the third and fourth place, as part of the 1980 Olympic programme, between the teams of the USSR and Yugoslavia, generated a big deal of interest from the social media users. On August 1, the match was simulated across all the ROC social media accounts to commemorate the legendary sporting event.

Total reach of the project on the ROC social media channels exceeded five million people, and the engagement rate tells us that the 1980 Moscow Olympic Games are of a great interest to our audience.

On August 8, we once again recollected the legacy of the Games during the XXXI All-Russian Olympic Day celebrations. I’m happy, that despite all the shortcomings and challenges associated with the pandemic, not only did we manage to really organise and hold this traditional summer sports festival, but to also remember and honour sports records of the past.

It was a truly exciting, diverse and inclusive event. Throughout the whole day on August 8 our guests were welcome to enjoy quite an intense programme, win gifts and prizes, and get the best emotions from the event.

At numerous stations, representing Olympic and non-Olympic sports, all participants found something to their liking. Each participant could try a simulation and an exercise, learn more about the equipment and outfit of the athletes, talk with Olympians and sports veterans, including the heroes of the XXII Moscow Olympic Games.

As always, renowned athletes were the main protagonists of the festival in Moscow. There was a special podium where a stand dedicated to the 40th anniversary of the Moscow Games invited users to experience the atmosphere of the Olympics. Pins, tickets, souvenirs, outfits and other Olympic artefacts even grabbed the attention of people far outside the world of sports.

Members of the 1980 Olympic Organising Committee shared the memories of the first-ever Summer Olympics held in Moscow – those were the people, who trained athletes, built Olympic facilities, accompanied foreign delegations and performed in the shows of the Opening and Closing Ceremonies of the Olympic Games. Participants of the festival could literally touch the sports history of Russia, hold and take pictures of the original Olympic Torch designs from 1980 and 2014.

In Moscow, the main venue of the XXXI All-Russian Olympic Day was visited by more than 20,000 guests, and total number of participants across the country amounted to almost 400,000 guests. Our main goal was to hold a major sports event across the country with due consideration of the circumstances and do everything we planned to. I can state without a doubt that we successfully accomplished that goal.

It was important for us to properly hold this traditional summer festival of sports, Olympism and a healthy lifestyle, while observing all the safety regulations. We managed to engage most of the regions of our country – we told the story of probably the most significant multisport and cultural event in the USSR history.

I would like to believe that we will preserve the tradition of such festivals in the future and that every year, as many people as possible, especially young people, will join the celebrations.