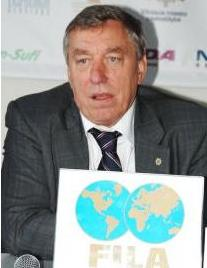 United World Wrestling (UWW) says it has contacted the Azerbaijan Wrestling Federation to gather more information about payments made to the governing body's former President Raphael Martinetti and his wife.

Swiss newspaper Le Matin revealed that the Swiss Federal Court has ordered Martinetti and his wife to pay taxes on sums of money donated to the pair in 2010 and 2012.

Le Matin wrote that a member of the Azeri Government had wanted to make a gift to the pair, with the larger payment made into Martinetti's wife's account after she signed a donation contract.

It is claimed that following Martinetti's resignation as President of the International Federation of Associated Wrestling Styles – as it was then known – in 2013, Azerbaijan stopped honouring a sponsorship contract to the governing body.

Martinetti and his wife had appealed a decision which viewed the donations as taxable income.

Valais tax authorities reportedly accepted the principle of the donation but the Swiss Federal Court has ruled the money must be considered taxable.

The court reportedly deemed the donation contract as being incompatible with the concept of a donation as governed by the Swiss Code of Obligations.

Le Matin reported that neither Martinetti nor his wife responded to requests for comment on the case.

UWW issued a statement following the report, with the governing body saying it had not been aware of the payments.

The organisation said it is reviewing the situation to determine whether action may be required.

"FILA President Raphael Martinetti and his wife have been ordered by the Swiss Government to pay tax on large sums of money given to the couple in 2010 and 2012 by unnamed persons in Azerbaijan," a UWW statement said.

"Prior to today's story, United World Wrestling was not aware of these payments and has contacted the Azerbaijan Wrestling Federation to gather more information.

"We are reviewing the situation to determine what occurred and if any further action is required.

"United World Wrestling is fully committed to fair play and will not tolerate unethical behaviour by members of our staff, national federations, referees, coaches, or athletes."

Martinetti was forced to resign as FILA President in 2013, with the Swiss official's departure coming after wrestling was recommended for removal from the Olympic programme.

Serbia's Nenad Lalovic was appointed Acting FILA President before taking on the role on a permanent basis after ensuring the sport avoided removal from the Games.

Lalovic, who has risen to become a member of the International Olympic Committee's Executive Board, oversaw a series of reforms, which included the governing body being renamed UWW.