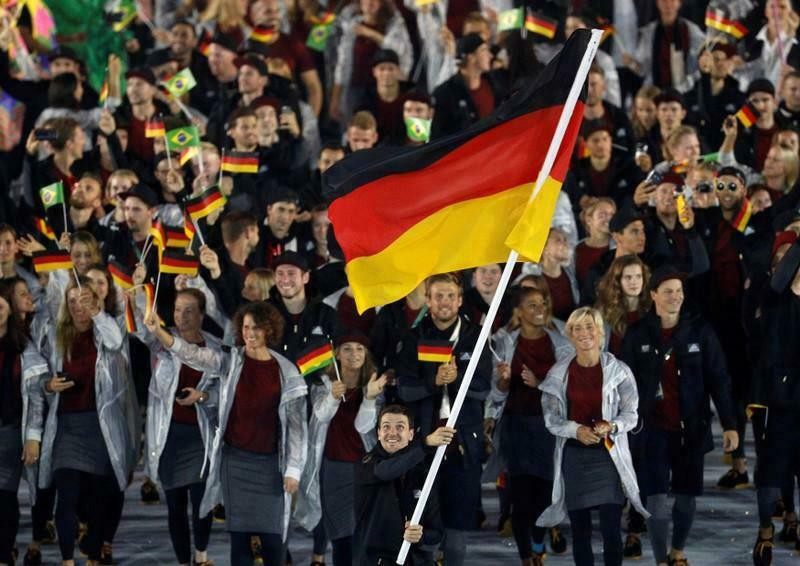 It is the latest unique piece of Olympic memorabilia to be listed on the popular auction website.

It joins the Olympic Rings that were hung on Sydney Harbour Bridge during the 2000 Olympic Games and a psychedelic bus used during the Closing Ceremony of London 2012.

The German flag was carried by table tennis player Timo Boll during the Opening Ceremony at the Maracanã Stadium in the Brazilian city.

He led out a German team that was more than 400 strong and went on to finish fifth overall in the final medals table.

They won a total of 42 medals, including 17 gold, Germany’s most successful performance since Atlanta 1996.

Boll helped contribute to Germany’s medal tally, joining with Dimitrij Ovtcharov and Bastian Steger to win a bronze in the men’s team event.

It was the third consecutive Olympics where Boll had been part of a German team to win a medal in the team event, following a silver at Beijing 2008 and bronze at London 2012.

Now 39, Boll is hoping to compete at the re-arranged Olympic Games in Tokyo next year.

Boll was competing at his fifth Olympics and was given the honour of carrying the flag ahead of Germany’s hockey captain Moritz Fürste, pentathlete Lena Schöneborn, eventing rider Ingrid Klimke and cyclist Kristina Vogel.

He followed Natascha Keller, a hockey gold medallist in Athens 2004, who was the flagbearer at London in 2012, and National Basketball Association star Dirk Nowitzki, who did so at Beijing 2008.

Boll described the moment as "definitely the high point of my career".

According to the listing on eBay, the flag is being sold by a dealer in Orlando in the United States.

"This Official Memorabilia product of the Rio 2016 Games is an authentic piece of Olympic sporting history, commemorating the first ever Olympic Games hosted by Brazil," the listing says.

"This item has been affixed with the Rio 2016 Official Memorabilia hologram.

"The unique serial number indicated on the hologram, along with the supporting Official Memorabilia authentication document included, provides assurance that this is a genuine piece of Olympic Games history."

A commemorative leather tag and certificate is included with the item, the seller promises, and it all comes with documents to prove that is it genuine.

The dealer claims they are open to offers.

"Make an honest offer and we can negotiate," they say in the eBay listing.