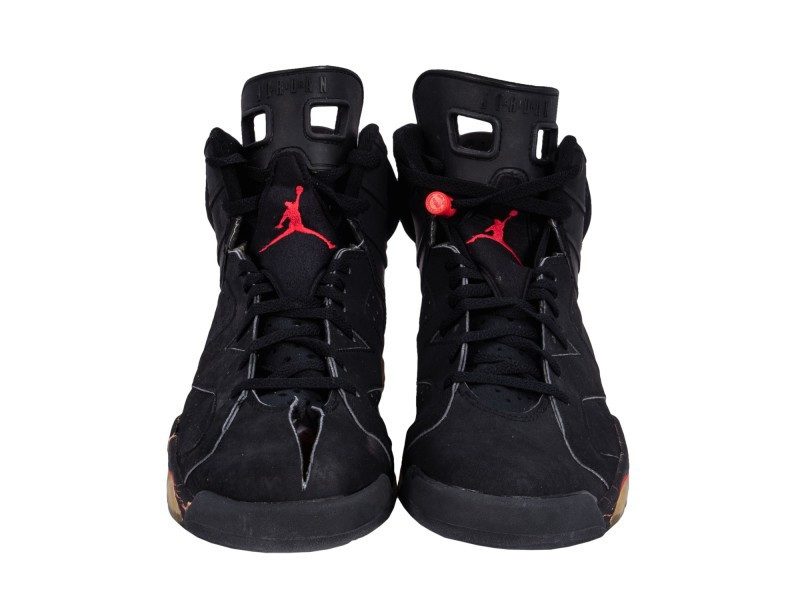 More important memorabilia from Michael Jordan’s legendary career has been put up for auction, including a pair of trainers that could fetch a record price.

The trainers are from the fourth game of the 1991 National Basketball Association (NBA) Finals when the double Olympic gold medallist scored 28 points as the Chicago Bulls beat the Los Angeles Lakers 97-82 at the Great Western Forum in Inglewood.

Jordan later gave the shoes to Sonny Vaccaro, the man who in 1984 had signed the then fledging young superstar to Nike, which developed the Air Jordan range of trainers, which have since become an iconic fashion item.

The trainers are part of a joint auction being conducted by Goldin Auctions and Sotheby’s as part of its "A Century of Champions" sale, which is due to end on December 7.

They were a pair worn by Jordan in 1984 before the launch of his signature Air Jordan 1 model during pre-season and early games of his rookie year shortly after helping the United States win the Olympic gold medal at Los Angeles, making them extremely rare.

The trainers were worn by Jordan during a match in Trieste in Italy, playing for the local Stefanel team in an event organised by Nike.

Jordan scored 30 points in the match and shattered the backboard so hard, that one of the tiny shards of glass is still lodged in the sole of the left shoe.

The jersey Jordan was wearing in that match has also now come up for auction in a separate "Michael Jordan only" sale currently being promoted by Sotheby’s and which is due to reach its conclusion on Thursday (December 3).

Vaccaro, now 81, told USA Today that he had never asked athletes for memorabilia and even refused an offer from Jordan to attend a 1991 NBA Finals game in Los Angeles.

But after the Bulls clinched their first NBA title, Jordan left a box for Vaccaro that contained a pair of black Air Jordans he wore to start game four.

The shoes were signed twice.

"There’s 10,000 pairs of Michael’s shoes - his first dunk, his first game, this one, that one and they’re all valuable and people save them," Vaccaro told USA Today.

"But this was me and him 30 years ago and I never thought I’d sell them, but it’s the right point and the right time."

The shoes come with a letter of provenance from Vaccaro and feature the Air Jordan silhouette logo embroidered in red on the tongue of each sneaker.

The backs of each sneaker have a raised Nike logo.

The right shoe has a slit on the toe, which was added after Jordan sprained his big toe during the series.

There is also a letter of authentication from Sports Investors Authentication, after photo-matching the sneakers to game four.

The signed jersey is part of several items from Carlo Stefanel, whose organisation was the sponsor of the team Jordan represented during the Nike exhibition game in Italy.

"I am remarkably excited to bring this game-worn historic 'Shattered Backboard' jersey to market from my personal collection," Stefanel said.

"It was an honour for Stefanel to sponsor the Stefanel Trieste team, and to be part of such an iconic moment of Michael Jordan’s incredible legacy."

More details of the trainers can be found here and the vest here.