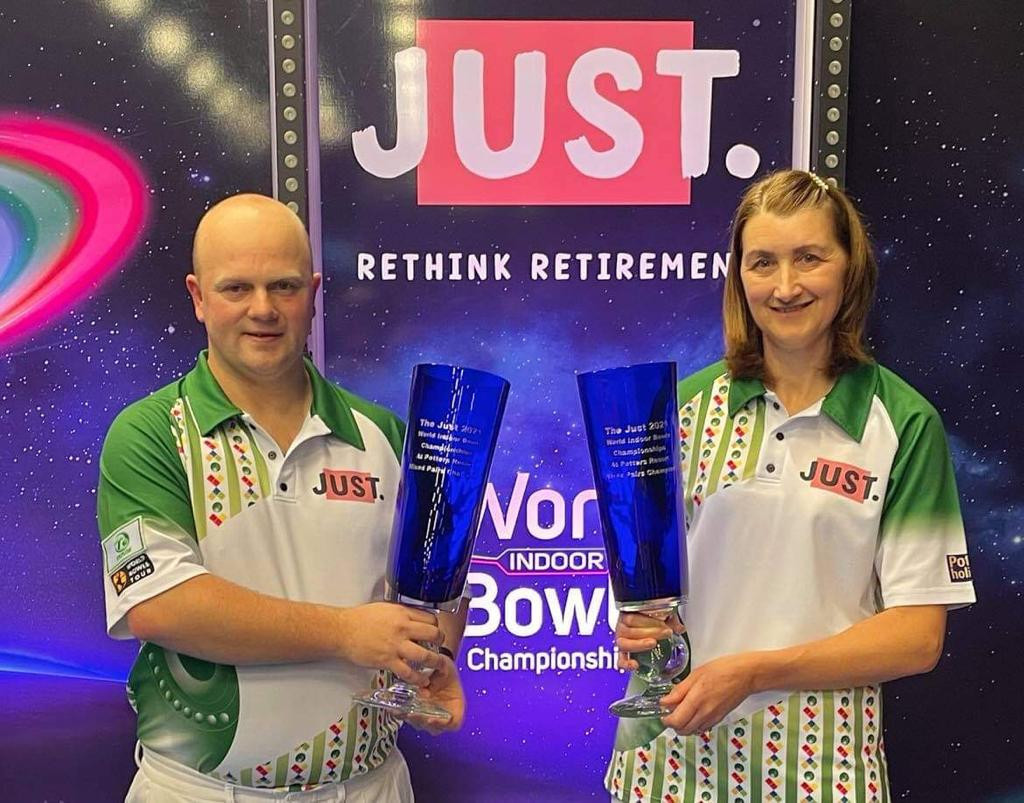 Scottish team Julie Forrest and Stewart Anderson claimed the second title to be decided at the World Indoor Bowls Championships after a straight sets victory in the mixed pairs final.

Forrest and Anderson overhauled the Scottish-English partnership of Carla Banks and Robert Paxton as they triumphed 8-3 6-5 at Potters Leisure Resort in Great Yarmouth, England.

Forrest and Anderson pulled away towards the latter stages of set one with two late singles helping them comfortably win it by five shots at 8-3.

The second set was a much tighter affair and at 5-5 heading into the last end it was all to play for.

A high quality final end showed both sides of the game with Banks initially drawing two woods very close to the jack to increase the possibility of a tie-break set.

Forrest then showcased the other facet of the game as she perfectly executed a running bowl to take the jack and knock it into the ditch, with her wood following to take the shot.

Paxton then played a draw shot to the edge of the rink to reclaim the advantage before Anderson removed the wood to put the all Scottish pair on the brink of a dramatic victory.

Paxton could not repeat his heroic drawing shot with his last wood coming up short and giving Forrest and Anderson the title.

The day’s other matches saw the first three second round contests in the open singles take place.

In an all English affair Perry Martin beat Mark Royal in straight sets, with Martin claiming set one 10-7, thanks to a treble on the penultimate end which gave him a lead that he maintained.

Set two saw single shots scored on every end with Martin dominating to take it 6-2 and seal a quarter-final place.

Another all English battle saw Mark Dawes beat Mervyn King in three sets in a match that pitted two of the game’s best drawing players against each other.

A high quality first set came down to the final bowl of the final end which King drew inch perfectly to the jack to score two shots and claim the set 7-6.

Set two went to Dawes who claimed it comfortably 12-3, pulling away from his opponent after scoring a treble on end four.

The match then went to a three end tie-break with more high-quality bowls on display as Dawes won by two ends to one.

The day’s final match saw something of a surprise as five-time open singles champion and fourth seed Paul Foster of Scotland was beaten in straight sets by England’s Wayne Willgress.

Willgress, a painter and decorator who lives close to the venue for the championships, scored a double on the final end of set one to go from 6-5 behind and win it 7-6.

Set two was equally tight and tense and with singles scored on each of the first eight ends, it came down to the final end again.

Willgress scored the crucial single on end nine to secure a 5-4 win and seal his place in the last eight of the open singles competition.

Tomorrow’s schedule features two more open singles second round matches as well as the ladies singles semi-finals, with Devon Cooper playing Katherine Rednall in an all English affair and England’s Rebecca Willgress up against Laura Daniels of Wales.