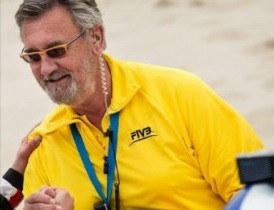 Experienced beach volleyball instructor and referee Brehaut has taken up the voluntary role of planning, developing and delivering England's beach volleyball performance framework in the run-up to Birmingham 2022.

Brehaut will work with the beach performance group and athletes, coaching teams and relevant parties to ensure performance strategies and visions are aligned.

Beach volleyball is to make its second appearance at the Commonwealth Games next year after Gold Coast 2018.

"Jeff has over 20 years of experience working with beach volleyball at the very highest levels, so we are incredibly fortunate to be able to utilise this knowledge to help develop our performance structure and work with our athletes and coaches.

"We are confident that Jeff can help improve both our preparation ahead of the Commonwealth Games next year, but also develop a longer-term structure which will help our athletes succeed for years to come."

Brehaut officiated the men's gold-medal match at the Atlanta 1996 Olympics, the first time beach volleyball featured at the Games.

"I am very excited to play a leading role in pushing English beach volleyball to the next level," Brehaut said.

"In the short-term, the Commonwealth Games will help raise the visibility of the sport and this is an opportunity that we must capitalise on to give us momentum going forward.

"The future development of beach volleyball will be difficult, but I know that we can find the resources to develop a programme that, over time, can get us playing at a higher level while also encouraging higher levels of participation.

"I hope that by working together we can move beach volleyball to the next level and raise the profile of volleyball in general.

"I look forward to working with the community to make a difference and bring about lasting success."

The 2022 Commonwealth Games are scheduled to run in Birmingham in England from July 28 to August 8.