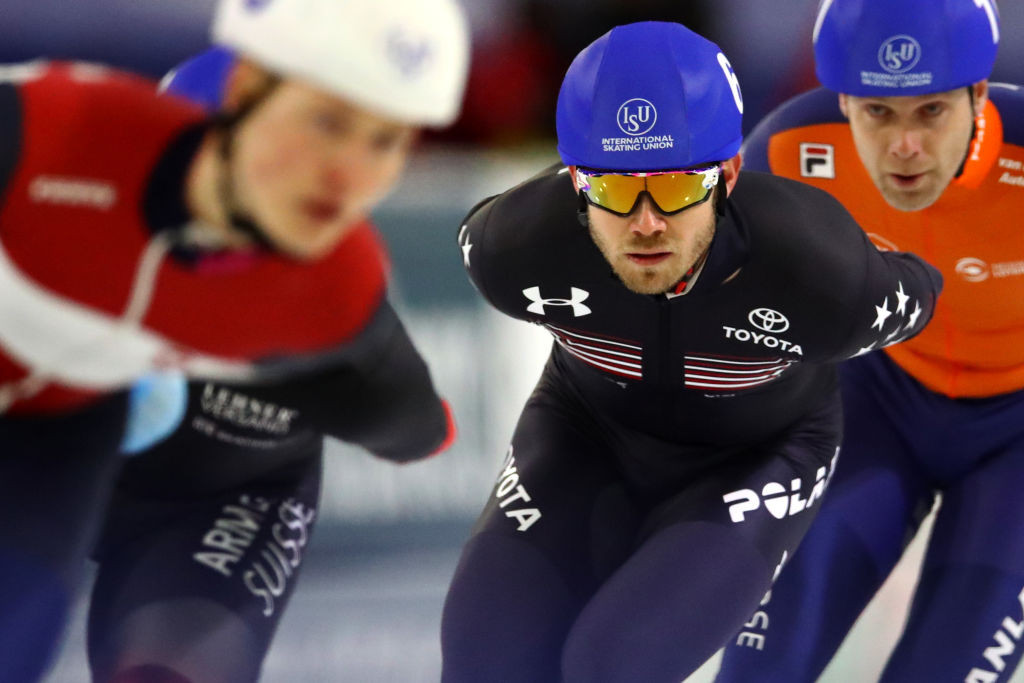 The 35-year-old is the first man or woman to win three mass start gold medals in an event that has been on the World Single Distances Championships programme since 2015.

Mantia did not look as though he would challenge for a medal until he made his move three laps from the end, breaking away from the rest of the field before crossing the line in 7min 32.470sec at Thialf Arena.

Arjan Stroetinga of The Netherlands was second having finished in 7:32.770, while Belgium's Bart Swings took bronze in 7:32.830.

Mantia's compatriot Brittany Bowe secured the third 1,000 metres world title of her career in a time of 1:14.128.

The Olympic team bronze medallist emerged victorious in a head-to-head battle with Dutch skater Jutta Leerdam, who was forced to settle for silver, 0.54sec behind.

"Pressure is definitely a privilege because not many people get to feel it," said Bowe.

"It’s whether or not you can embrace it.

"It doesn’t always go the way you want it to go.

"We’re not machines, we’re only humans

"The race went exactly how I replayed it time and time again in my head, and I was really happy to cross the line and see that green number next to my name."

Marijke Groenewoud of The Netherlands claimed the biggest triumph of her career as she won the women's mass start.

Groenewoud, who did not appear to realise she had sealed gold, edged out Canada's Ivanie Blondin in a time of 8:43.150.

Blondin did enough for silver, while bronze went to Groenewoud's compatriot Irene Schouten.

Verbij proved too quick for his challengers as Pavel Kuliznikhov, representing the neutral Russian Skating Union team, was 0.26 slower in second.

Canada's Laurent Dubreuil, who earned the 500m crown yesterday, was the recipient of the bronze medal after clocking 1:08.569.

The Championships are due to conclude tomorrow.