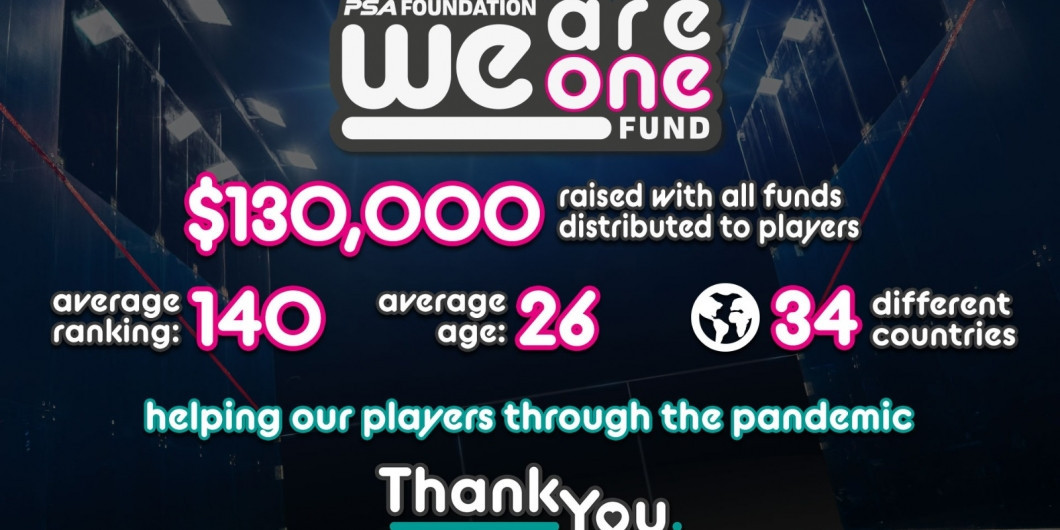 More than $130,000 (£95,000/€ 109,000) has been raised to support players in 34 countries during the pandemic through the We Are One fund organised by the Professional Squash Association (PSA) Foundation.

A player-driven initiative, the We Are One fund has received support from a diverse range of individuals and groups following the suspension of the PSA Tour in March 2020 and the subsequent lack of earning opportunities.

The "We Are One" fund is an initiative driven by the players, providing relief to those in need following the suspension of the PSA Tour.

The PSA said the fund "seeks to support those players that are struggling with covering basic necessities such as food, bills, rent and medical expenses".

More than $40,000 was raised by the PSA Foundation - the charitable arm of the PSA - during the height of the pandemic last year.

The PSA Foundation said it was "delighted to have been able to reach 34 different countries, showing the true wide spread of those active on the PSA Tour".

It also claimed it has nearly achieved parity in distribution to men and women.

"Generous donations have come in from squash fans, many PSA players who aren’t as adversely affected, PSA staff and board members," the PSA said.

"Various clubs and smaller social groups have hosted fundraisers to show their support.

"Multiple international fundraisers have taken place, including but not limited to; the World Squash Day Auction; The Squash Summit 2021, the proceeds from merchandise sales of the St. James’s Place Canary Wharf Squash Classic 2020 & the sales from the Behind The Glass - 2019/20 PSA World Tour Photobook.

"A selection of World Tour tournaments have been able to make a return, but with heavy restrictions and limited draw sizes, unfortunately, this still leaves many players still without their usual income streams."