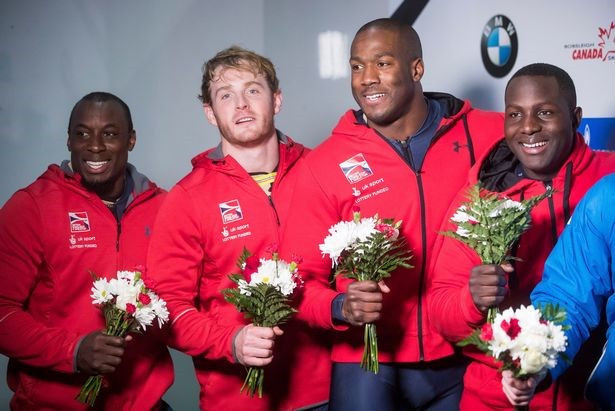 Lamin Deen has been left reflecting on what might have been after it was confirmed that Britain have been upgraded to the gold medal retrospectively at the International Bobsleigh and Skeleton Federation World Cup event in Whistler in 2017.

It follows the confirmation by the world governing body that Russia, the original winners, have been disqualified because of an anti-doping violation.

This is the first time that a British four-man squad has won a gold medal in bobsleigh.

Deen, Britain’s number one four-man bobsleigh driver, only found out about the podium change when, several days ago, he started to receive messages of congratulations from other teams and athletes.

Deen was originally awarded silver in November 2017 when his squad of Toby Olubi, Ben Simons and Andrew Matthews reached 97 miles per hour in the first run, setting a new speed record for a bobsleigh and a new track record of 50.66sec for the Canadian track.

On the day, though, they were pipped to gold in the second run by Russia’s Alexander Kasjanov, who has since been disqualified.

"On that day in Whistler we were at our best, setting a new speed and track record against the best teams in the world," Deen said.

"I was in the form of my life, which has now been rewarded retrospectively with a World Cup gold medal.

"To now be awarded that gold is a fantastic triple achievement that I will treasure."

But Deen believes that if had the squad won gold at the time, it would have impacted far more positively on his team’s funding prospects and performance going into the following year’s Winter Olympic Games in Pyeongchang.

The team’s preparations for Pyeongchang 2018 were hit by a period of upheaval within British Bobsleigh which saw the performance director, several British Bobsleigh and Skeleton Association (BBSA) coaches and the chief executive Richard Parker resign.

Then the sled on which the squad successfully competed in Whistler on was taken away from Deen, forcing his squad to compete on an old, untested machine.

At Pyeongchang 2018, Deen had his runners ruled out by the scrutineers, even though they had passed four inspections that season in the run-up to the Games, and his squad finished 18th.

The following season Deen was the only British driver not to receive any funding from the BBSA, a decision he was told was based on his age as he was approaching 36 at the time.

It left Deen, a serving non-commissioned officer in the Grenadier Guards, contemplating retirement.

"It was my Regiment, the Grenadier Guards, and home supporters who persuaded me to continue after the last Olympics because we are, literally, one step away from the podium," he said.

Deen, who turned 40 last Thursday (June 17), now has his sights set on Beijing 2022 with a new team that includes the 2012 Olympic long jump champion Greg Rutherford.

"This will be my last Olympic Games and I’d like to thank my regiment and my sponsors for their support which has allowed us to continue to compete," he said.

"What is needed now is a proper review of the system in which teams are funded based on ability, experience and performance.

"I have a fantastic team of athletes with huge potential.

"We’re training hard, I am driving really well, and I have the experience to deliver again on the biggest stage of all.

"We are improving, and we plan to shock the world when I secure the right equipment."