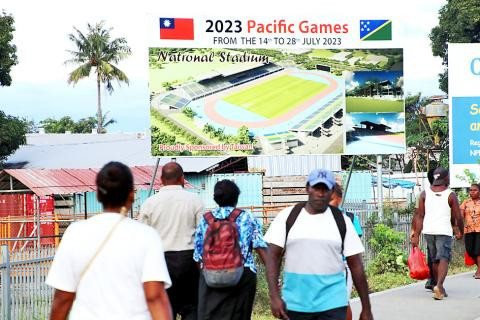 A delay from July to November for the 2023 Pacific Games has been agreed following a request from the Solomon Islands, who asked for more time to prepare due to the COVID-19 pandemic.

The Pacific Games Council (PGC) Executive Board approved the change of dates after consultation with the 22 countries and territories eligible to compete in the event and the 24 Oceania governing bodies who oversee the sports on the programme.

The revised dates for the Games are now due to be November 19 until December 2.

The Solomon Islands has so far escaped relatively lightly during the pandemic.

According to the World Health Organization, there has been only 20 cases with no deaths.

But delays to the commencement of the venue construction programme in the Solomon Islands capital Honiara, has led to the Games organisers to request the change from the original dates of July 16 to 29.

The PGC has been assured that the venue construction programme, largely supported by the Chinese, Indonesian, and Papua New Guinea Governments, and which is underway, should be completed by mid-2023.

Officials in Honiara were concerned that if the Games were held in their original July slot it would not allow enough time to test the venues and make them fully operational.

It also did not allow for contingencies in the event of further slippage in the construction programme due to natural causes, like heavier than usual rains.

These additional four months of preparation time will allow the venues to be fully completed and tested, it is hoped.

"First and foremost, let me convey to the Executive Board of the Pacific Games Council, and to the 22 member Pacific Games Associations and the 24 Oceania Federations for the sports on the Games programme, the sincere appreciation of our nation and our Government for the kindred spirit demonstrated by the members of our Pacific family to allow the deferment of the 2023 Pacific Games by four months," Solomon Islands Prime Minister Manasseh Sogavare said on the PGC Facebook page.

"This short delay will enable Solomon Islands to complete the construction of all the facilities it requires to successfully host the 2023 Pacific Games.

"The reason for their request is simply that delays forced upon us as the host nation by the COVID-19 pandemic had undermined our ability to complete the construction of all the facilities we require to successfully host the Games."