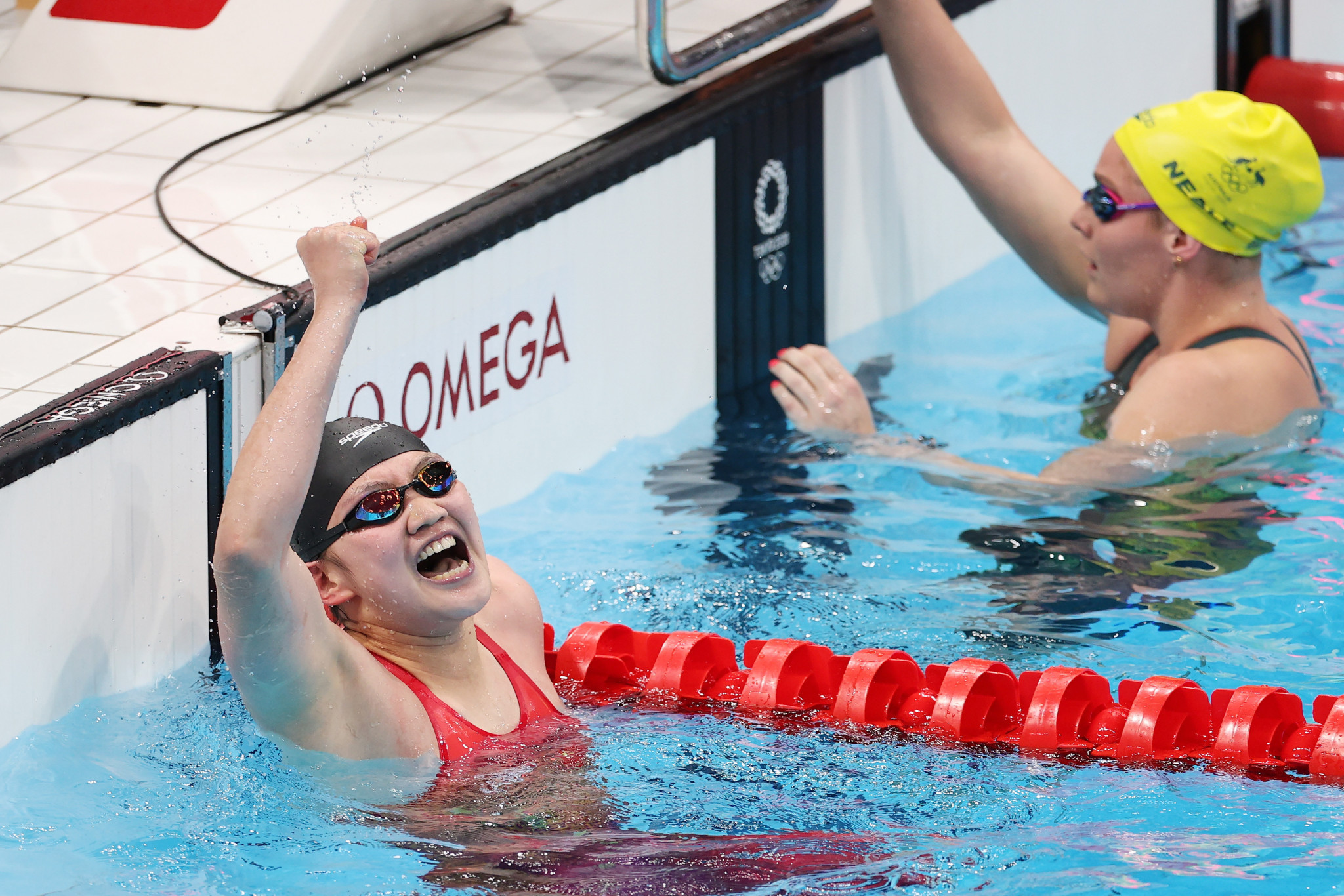 The relay completed the morning’s swimming schedule, with Australia, China and the US expected to contend for the title.

Tang Muhan and Zhang Yufei maintained China’s slender advantage over Australia by holding off Emma McKeon and Madison Wilson, respectively, with 0.41 separating the nations heading into the final leg.

China’s biggest challenge would come from the US, as six-time Olympic champion Katie Ledecky posted the fastest split of the final by clocking 1:53.76.

The effort saw Ledecky move into silver medal position, but Li Bingjie finished strongly as China finished in a world record time of 7:40.33 to win gold.

The US team of Allison Schmitt, Paige Madden, Kathryn McLaughlin and Ledecky ended just 0.4 seconds off the pace as the silver medallists.

Australia were left settling for bronze as Leah Neale stopped the clock in 7:41.29.

The three podium finishers each dipped under the previous world record mark of 7:41.50, which was set by Australia at the 2019 World Championships in Gwangju.

China had already celebrated gold in the pool earlier in the session, with Zhang earning a dominant victory in the women’s 200 metres butterfly.

Zhang led from the start of the final and finished the event in an Olympic record time of 2:03.86.

Regan Smith and Hali Flickinger rounded off the podium places, with the Americans finishing 1.44 and 1.79 seconds behind the winner, respectively.

Dressel powered to victory in an Olympic record time of 47.02, shaving 0.03 seconds off the previous mark set by Australia’s Eamon Sullivan at Beijing 2008.

The result gave Dressel his first individual Olympic title, with the American having won two relay titles at Rio 2016 and one at Tokyo 2020.

Chambers claimed the silver medal at 0.06 behind the winner, with the Russian Olympic Committee’s Kliment Kolesnikov taking bronze in 47.44.

Finke headed into the final 100 metres of the race in fifth position, with the top qualifier Mykhailo Romanchuk of Ukraine and Germany’s Florian Wellbrock among those chasing long-time leader Gregorio Paltrinieri of Italy.

A strong finish from Izaac Stubblety-Cook saw the Australian triumph in the men’s 200m breaststroke final.

Dutch swimmer Arno Kamminga was under world record pace during the opening 150m of the final, but slowed in the part of the race as Stubblety-Cook maintained his pace.

Stubblety-Cook completed the event in an Olympic record of 2:06.38 to win gold, while the fast starting Kamminga secured silver in 2:07.01.

Matti Mattsson won Finland’s first medal of Tokyo 2020 after winning bronze in 2:07.13, as world record holder Anton Chupkov of the ROC missed out on the podium in fourth.