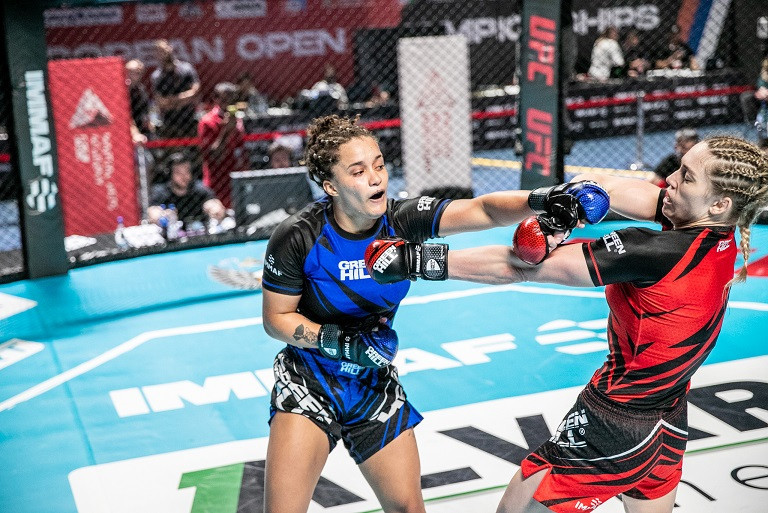 The finalists have been confirmed in all weight categories following the penultimate day’s action at the International Mixed Martial Arts Federation (IMMAF) European and Junior European Open Championships in Kazan.

In total, 50 bouts took place across two cages at the Basket Hall, which included one of the biggest upsets of the tournament so far in the women’s featherweight division.

Shirkanova will face compatriot Daria Pirogova in the final, after she won an all Russian encounter with Olga Lagodnaya by unanimous decision.

In the women’s strawweight category 2019 Asian Open gold medallist Ayan Tursyn of Kazakhstan overcame Martina Corradi of Italy by second round knockout, finishing the contest with a spinning back fist.

Tursyn will now face Aieza Ramos Bertolso of Bahrain in the final after she defeated Nurzhamal Sadykova of Kazakhstan by submission, courtesy of a rear naked choke in round two.

Watch the Finals of the 2021 IMMAF European Open Championships, Friday, August 20th from 11am UTC+3 on https://t.co/d80NHH86sM. pic.twitter.com/ZQVaMhGYKs

World champion Ramazan Gitnov of Bahrain, who is also ranked number one pound-for-pound was victorious in the men’s welterweight category, winning by unanimous points decision against Russia’s Evgeny Morozov.

Gitinov will face compatriot Murad Guseinov in the final, after he beat Daniil Shirokov of Russia by submission, courtesy of an anaconda choke in the second round.

In her first major senior semi-final Magdalena Czaban of Poland, a junior world and European champion, beat Inas Ashirbek of Kazakhstan in the atomweight category by technical knockout in round one.

Czaban will face Jenna Horto of Finland in the final, after she beat Valeriya Tepysheva of Russia by submission in the second round, courtesy of a rear naked choke.

Finally, also making the upgrade to the senior ranks was Omar Aliev, the 2019 junior world and European champion from Russia, who beat compatriot Maksim Kotelnikov by unanimous decision in the heavyweight category.

Aliev will take on Rasul Magomedov of Bahrain in the final, after he beat Andrey Gaidamaka of Russia by unanimous decision in round three.

Reflecting on the day’s action IMMAF President Kerrith Brown said: "More highly competitive and compelling bouts in the semi-finals today with some narrow upsets paving the way for new faces to watch.

"It’s great to see how stacked the divisions are in terms of talent, which will no doubt lead to some exciting rematches at the Worlds.

"Again, congratulations to the winners who now move onto the finals to battle for gold, and also to today’s resulting bronze medallists."

Up to 3,000 fans are expected to be allowed into tomorrow’s finals, with entry free.