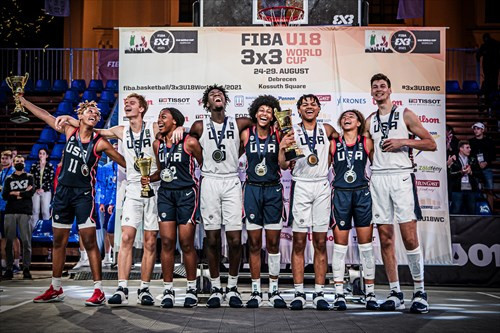 The United States retained both the men's and women's titles at the 2021 International Basketball Federation 3x3 Under-18 World Cup, via dominant performances throughout.

The US completed a historic double-double after becoming the first country to win both men's and women's titles in 2019 in Mongolia.

In the men's category, the US won all six matches before the 10-minute time limit, with Estonia the only side to really challenge them, losing 21-17 in the opening match and 21-14 in the final.

Kyle Filipowski top scored in the final in Debrecen in Hungary with nine points, while Keyonte George, who was later named tournament Most Valuable Player (MVP), added seven scores.

George, Milasheuski and Estonia's Markus Heinakroon comprised the team of the tournament.

In the women's event, the US won all but one game, losing to Russia in the pool stage.

In the knockout stages, they dispatched with Estonia 18-4 in the quarter-finals, then squeezed past Germany 15-14 in the semi-finals, before defeating Spain 21-14 in the final.

Mikaylah Williams, at just 16, was named tournament MVP, leading all scorers with a sensational 56 points, 20 more than any other player in the competition.

In the final, she scored a game-high 10 points and buried a shot from the 3x3 logo.

Williams, Spain's Elena Buenavida and Hungary's Zita Szabo were named to the team of the tournament.