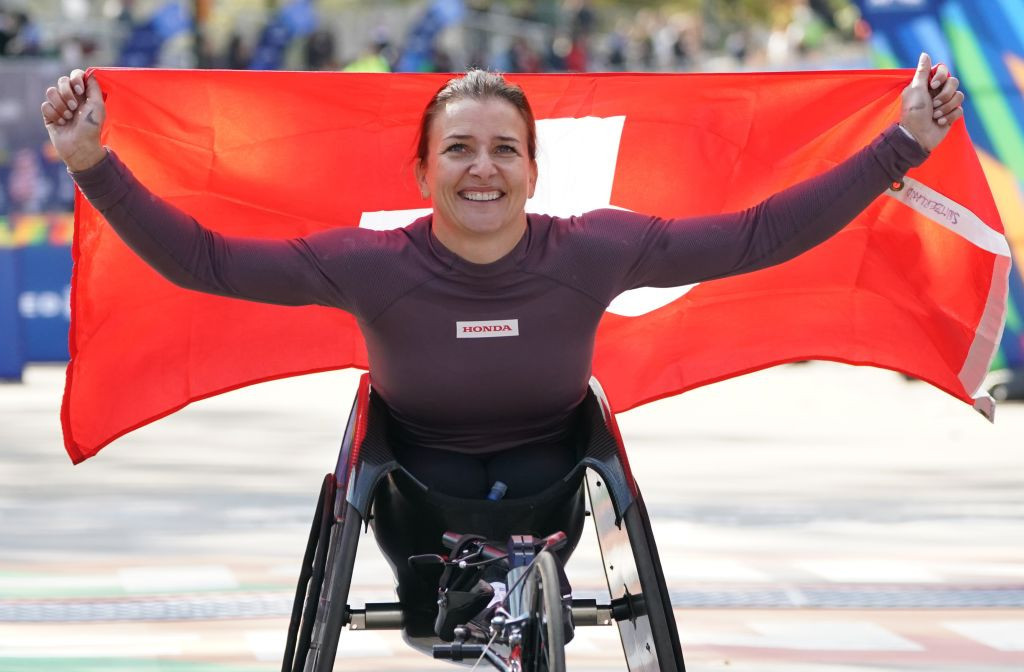 Manuela Schär, fresh from winning the women's wheelchair race at the Berlin Marathon, is set on adding a further title in London on Sunday when she faces a field including the athlete who narrowly beat her in last year’s race, Nikita den Boer.

Since that epic battle in windy, rainswept conditions on the closed, looped course in St James’s Park, both women have earned places on the Paralympic podium, with a thrilling race seeing Schär take silver and her Dutch rival bronze behind Australian winner Madison De Rozario.

"I didn’t know how my form would be in Berlin after getting back from Tokyo," Schär said today.

"It was really intense, but it was good to see I had had enough time to recover and now I am excited for Sunday."

With the London Marathon taking place for a second successive time in October, leading wheelchair racers are facing an unusually packed itinerary in terms of World Marathon Majors races.

After London, Schär will return home for two days before flying to compete in the Boston Marathon on October 11, before finishing her tour of events at the New York Marathon on November 7.

"When I got back from Berlin I found my chair hadn’t come with me," Schär said.

"I got it back just a few hours before I had to fly to London.

"Travel arrangements are probably the most challenging thing at the moment - I’ll be happier when we are back to the old timetable."

Den Boer is meanwhile approaching the defence of her title in buoyant mood.

"Winning here last year gave me a lot of confidence, and I know what I can do," she said.

"Taking a bronze in Tokyo also boosted my confidence.

"But I still need to do more marathons to improve my tactics."

Asked if she would prefer another rainy, windy day on Sunday she replied: "No, I don’t like the rain - the sun is better!"

The United States' Tokyo 2020 bronze medallist Daniel Romanchuk, winner in London last time he competed in 2019, is contemplating an even busier finale to his racing season as he plans to race the marathons at Chicago and Boston which take place on succeeding days.

"It’s not something I’ve done before," said the 23-year-old from Maryland.

"We’ll just have to see how it goes!"

In an earlier press conference appearance, home racer David Weir, the 42-year-old Londoner who has won six Olympic and six world titles, described Romanchuk as operating in "another universe" along with Switzerland's Marcel Hug.

The latter racer successfully defended his Olympic marathon title in Tokyo - as well as winning golds over 800 metres, 1500m and 5,000m - and won the men's race in Berlin last weekend.

Not surprisingly, Hug the is favourite to win on Sunday.

The Canadian will defend his title in 2021, while Weir is now looking forward to competing in his 22nd London Marathon in a row.

"I’m probably at the back end of my career at the moment," Weir said.

"But I just love doing the marathons and I’m pretty proud to be here for a 22nd consecutive time.

"The 2020 course didn’t really suit me because it was completely flat.

"I’m nearly double his weight and he was a lot quicker on that course.

"It was the first time I had beaten Marcel in a few years and it was nice to do that.

"Daniel and Marcel are on another level, they are in another universe at the moment.

"But I love challenges and love pushing myself to the limit.

"Marcel has got a Ferrari of a chair that seems to be helping him at the moment, but he is also at the prime age for racing.

"And Daniel is just a freak of nature I think.

"He’s still learning, he’s got amazing talent, speed, endurance, he can do everything on the track."

Weir has made little secret of his disappointment in his Tokyo 2020 showing, where he was fifth in a marathon won by his perennial rival Hug.

Since the Paralympics he has changed to new gloves - and reverted to his old racing chair.

"I’ve gone back to my old frame, a carbon chassis," he said.

"I felt I was losing a bit of power through the chair because it was aluminum, and I think I’m getting more from my old chair."