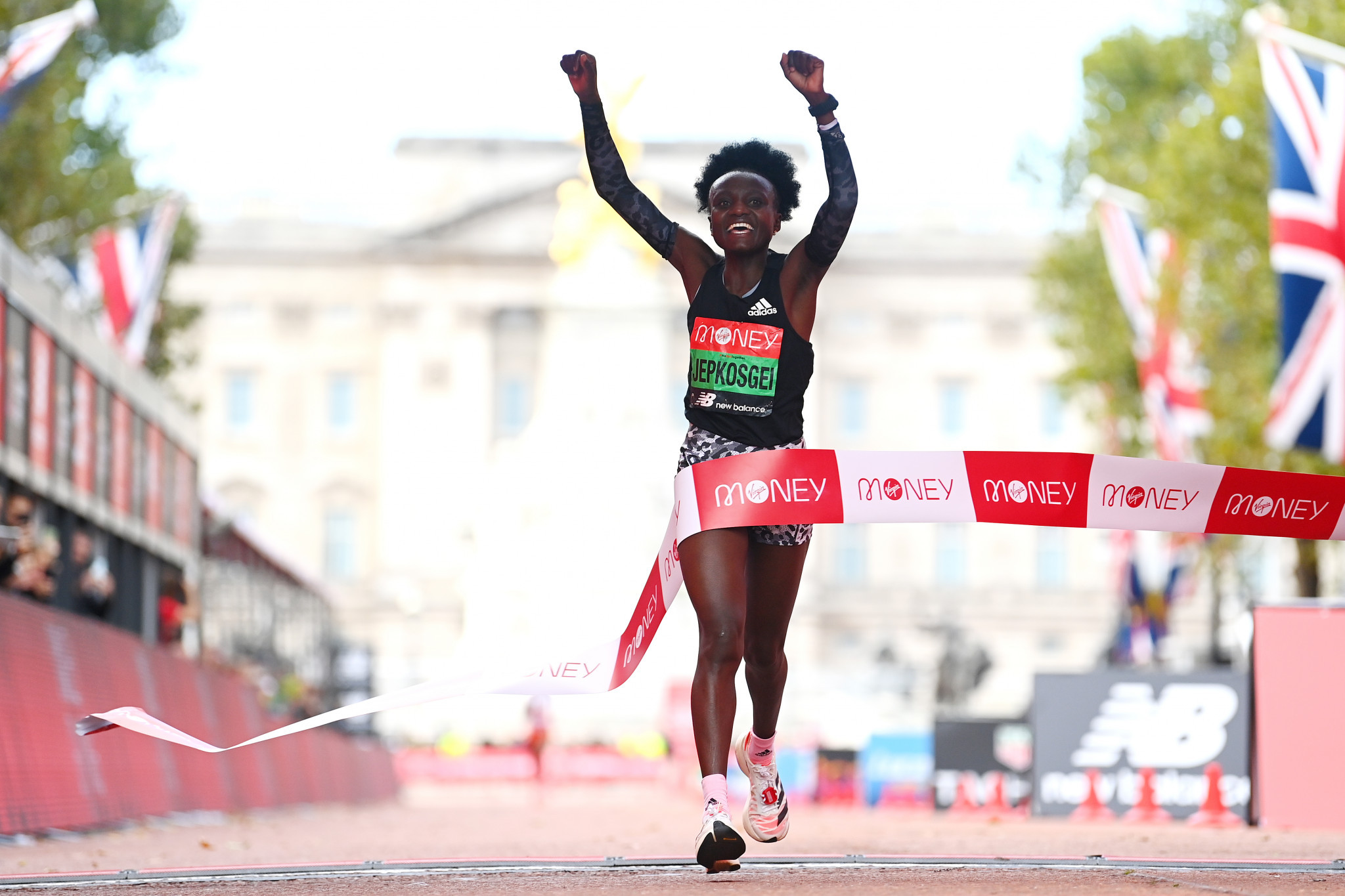 Joyciline Jepkosgei earned a runaway victory on her London Marathon debut in 2 hours 17min 43sec as Kenyan compatriot Brigid Kosgei, the world record-holder who had been seeking a third consecutive title, finished fourth.

The men’s race saw another clear winner as Ethiopia’s Sisay Lemma earned the best result of his career, moving away from a field stacked with sub-2:04:00 runners over the final two kilometres to finish in 2:04:01.

The men’s and women’s wheelchair races saw similar lone victors in the form of Switzerland’s Marcel Hug and Manuela Schär, with each winning a third London title.

Jepkosgei, a former world half marathon record-holder who won in New York two years ago in her first race over the marathon distance, was always pushing on at the front of a leading group that comprised five runners in the second half of the race.

The Kenyan pair were accompanied by two Ethiopians, 22-year-old Degitu Azimeraw, winner of the 2019 Amsterdam Marathon, and Ashete Bekere, fourth in the 2019 London Marathon, along with Israel’s Lonah Salpeter, a frontrunner in the Tokyo Olympic marathon until menstrual cramps sent her back down to 66th place.

With 35 of the 42.2km gone the race arrived at its crucial point as Jepkosgei, whose legs had not been tired by a draining Olympic race, pushed on and Kosgei was the first to drop back.

Soon Salpeter was also back down the road, and the two Ethiopians also, as the 27-year-old, who set a marathon personal best of 2:18:40 in finishing second at last year’s race in Valencia and won last month’s Berlin Half Marathon in a course record of 65min 16sec, strode away.

Azimeraw looked understandably excited about finishing second in 2:17:58, with third place going to Bekere in 2:18:18 , a weary Kosgei coming home in 2:18:40 and fifth place going to Salpeter.

Britain’s Charlotte Purdue, aggrieved at not being chosen for the Tokyo 2020 Olympics because selectors did not believe she was fully fit, finished 10th in 2:23:26, close to the second-best British women’s mark of 2:13:13 owned by Mara Yamauchi.

As with the women’s race, the men’s was dominated over the second half by a group of five, with Kenya’s Vincent Kipchumba, second behind Ethiopia’s Shura Kitata in London a year earlier, consistently in the lead.

Kipchumba shared drinks with fellow Kenyan Evans Chebet, as three Ethiopian runners padded behind them - Birhanu Legese, running his first London, whose time of 2:02:24 in finishing second at the 2019 Berlin Marathon made him the third-fastest of all time, Mosinet Geremew, fourth on the all-time list with 2:02:55, and Lemma, who had never won a big city marathon.

Lemma, 30, who finished third in London in 2019, ran conservatively until the last 2km before moving smoothly clear with enough composure to wave to the full grandstand at the finish.

While the race involved around 40,000 runners on the traditional course - following last year's closed, looped course in St James's Park - and also saw spectators lining the route as of old, continuing COVID-19 protocols meant winners were not able to actually share a podium.

Lemma's compatriot Kinde Atanaw, winner of the 2019 Valencia Marathon, missed the race after testing positive for COVID-19 on Friday afternoon.

Second place went once again to the gangling Kipchumba, who clocked 2:04:28, and the final podium place to Geremew in 2:04.41.

Kitata, meanwhile, had dropped off the lead pack within 10 minutes of the race starting, his right hamstring and left knee taped up, but gamely finished  sixth in 2:07:51.

Hug, who retained his Paralympic marathon title in Tokyo 2020, was at the top of his form and moved clear of his only lingering challenger, 2019 London winner Daniel Romanchuk, by halfway point to open up a five-minute gap by the 40km mark, finishing in a course record of 1:26:27.

The drama came in the race for third place, with 42-year-old home racer David Weir, racing in his 22nd consecutive London Marathon, going wheel-to-wheel with the defending champion, Brent Lakatos of Canada, before drawing clear to earn his place on the podium.

Schär’s win was even more clear cut as she parted company with her lingering challenger, multiple Olympic and world champion Tatyana McFadden, within the first quarter of an hour of the race and by the close she was passing several elite male racers.

Five minutes later, 17-year-old Merle Menje of Germany finished in 1:44:51 on her debut to take the runner-up spot after outsprinting the legendary McFadden, who was credited with the same time.