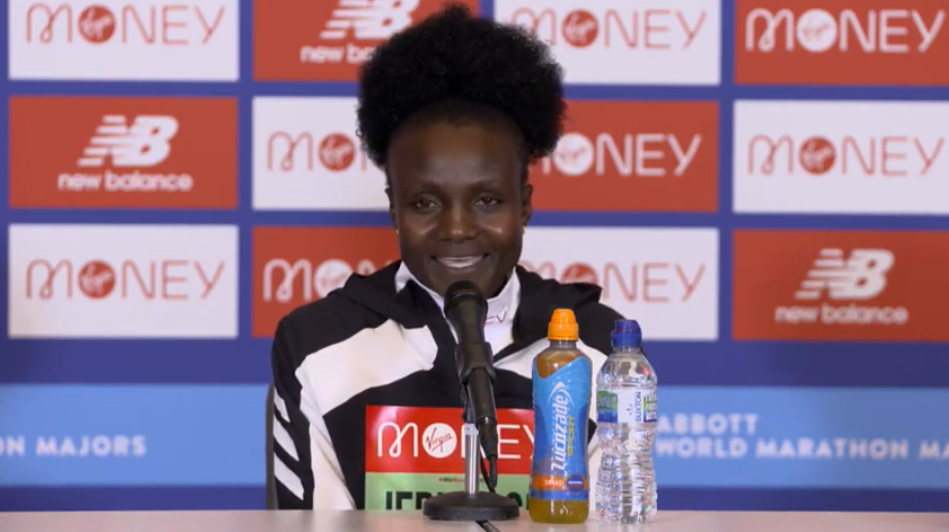 Joyciline Jepkosgei, who earned victory on her London Marathon debut in 2hr 17min 43sec yesterday, believes she can go faster still when she runs next year - when she plans to defend her title.

The 27-year-old Kenyan, a former world half marathon and world 10 kilometres record-holder, won in New York two years ago in 2:22:38 in her first race over the marathon distance and then ran 2:18:40 in finishing second in last year’s Valencia Marathon.

Her London winning time was only 42sec slower than the women-only race world record of 2:17:01 set by compatriot Mary Keitany in winning on the same course in 2017.

"This was my third marathon, and I have run faster each time, so this motivates me that I can do more," Jepkosgei said at today’s winners’ press conference.

"I will go back home now to recover before making plans for next year - but I am happy to come again to London next year."

Jepkosgei, who is coached by her husband, broke away from a leading group of five runners that included her compatriot Brigid Kosgei, the world record holder, with around seven kilometres to go.

"It was not an easy race," said Jepkosgei.

"There was lots of competition from other runners.

"My plan was to go with the pacemakers until they finished, but after that we stayed together and everyone was strong.

"But then I tried to move and there was no one following me.

"And I kept that pace - I was feeling comfortable.

"In the last kilometre I was feeling tired a little, but the cheering around me motivated me and I finished strongly.

"Winning here is a great achievement and it will last for all time for me."

She said her victory in last month’s Berlin Half Marathon in a course record of 65min 16sec had been a key part of her build-up.

"It was a test to me for this marathon so I was confident because running 3min 05sec, 3.06 per kilometre in Berlin told me that 3.15, 3.16 in London would be a comfortable pace."

For men’s winner Sisay Lemma of Ethiopia this was also a first London win - but it was a race with which he was very familiar, having finished third in last year’s edition on the closed, looped course within St James’s Park.

Lemma, who finished in 2:04:01, was emotional at the finish line and lay face down for a while in prayer.

"The London Marathon is the biggest marathon in the world and we all love to win it and that was a big achievement for me," he said.

"I was very excited and had to thank God as he helped me to do that.

"I was feeling extreme happiness."

Reflecting on the decisive break from the lead group with three miles to go which brought him his first big city marathon victory, the 30-year-old explained: "I realised the time was slow so I decided to push the race and when I started the others felt a bit tired so I increased it and ran away myself."

Lemma thus kept the title in Ethiopian hands after last year’s surprise win by compatriot Shura Kitata, who struggled to the line in sixth place yesterday with his right hamstring and left knee heavily taped.

"I was very happy for Shura last year, and he was happy for me this year," Lemma said.

"It’s not only we are from the same country but also we are best friends so this means a lot for us."

In the men’s and women’s wheelchair races Marcel Hug and Manuela Schär each earned a third London title in course records of 1:26:27 and 1:39:52 respectively.

"It was a perfect day," said Schär, who will race later this season in Boston on October 11 and New York on November 7.

Hug, meanwhile, is preparing for both those races also - and is adding a run-out in the Chicago Marathon on October 10.

The 35-year-old double Paralympic marathon champion, who also won in Berlin last month, is at the peak of his powers.

"It feels really amazing," he said.

"Physically and mentally I feel great, the new race chair feels just like flying - everything is perfect right now."