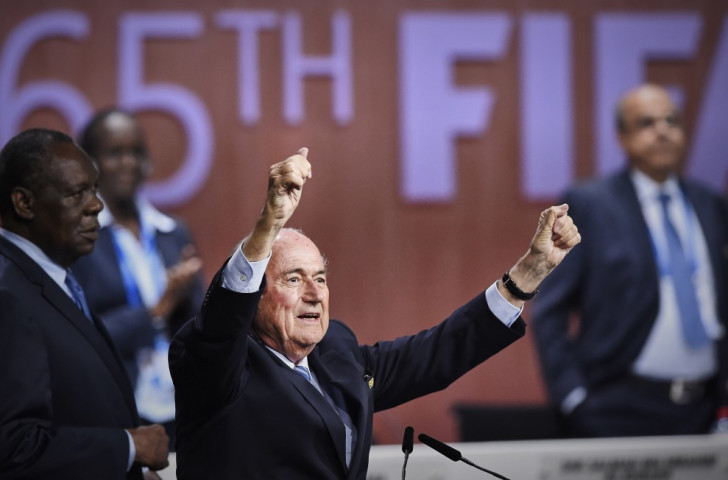 In an outcome sure to produce howls of outrage around the world, Blatter battled through a further escalation of the seemingly endless crisis surrounding the world football body to defeat his rival comfortably by 133 votes to 73.

The latest episode in FIFA’s soap opera of shame was triggered by the dramatic arrest and indictment of senior football figures, including Jeffrey Webb, a FIFA vice-president seen until this week as a potential successor to Blatter, just two days before this 65th FIFA Congress.

The 79 year-old Swiss incumbent, who has been President since 1998, now faces a tough - some would say a near impossible - task to persuade followers of the world’s most popular sport that FIFA will ever change its ways.

The only discernible pledge in a candidate’s speech that at times threatened to veer into soliloquy was to set up a Department for Professional Football at FIFA.

Even this may have been made with one eye on winning back some of the European votes that were expected predominantly to go to Prince Ali.

His challenger secured enough support to have forced a second ballot in which a straight, rather than a two-thirds, majority would have been enough to win.

Instead, he opted for a dignified exit, thanking those brave enough to support him before stating simply: “I will be withdrawing from the race”.

The 39-year-old will also be withdrawing, at least for now, from the FIFA top brass, having completed his term as the Asian Football Confederation (AFC)’s FIFA vice-president about an hour before the protracted Presidential voting process got under way.

Initial indications are that Blatter’s re-election may be good for the 11-member Oceania Football Confederation (OFC), who may see their allocation of World Cup, and possibly FIFA Executive Committee, slots increase.

In a candidate’s address that constituted one of several opportunities during the day for him to take to the microphone, Blatter pledged that he would shoulder responsibility for the “current storm”, while arguing: “What football needs right now is a strong leader, an experienced leader who knows the ins and outs of the situation.”

Striking a more emotive note, he told the 209 national associations, who were called on to traipse interminably in alphabetical order into one of two white polling booths erected to the side of the stage: “I would quite simply just like to stay with you.”

In the end, the outcome of the electoral contest was almost the most predictable aspect of a day that brought a demonstration, an anonymous bomb threat and a much-applauded handshake between Palestinian and Israeli football leaders.

In retrospect, the high water-mark of Prince Ali’s campaign probably came in the immediate aftermath of yesterday's hugely well-attended media conference by Michel Platini, President of UEFA, the European confederation thought to be the reservoir of most of the Jordanian’s support.

The sense from early this morning was that the likely result was drifting back in Blatter’s favour.

And, whether he knew it or not, the Swiss septuagenarian’s campaign received another significant boost around lunchtime, in the shape of a Reuters interview with  leading sports power broker Sheikh Ahmad Al-Fahad Al-Sabah in which the President of the Association of National Olympic Committees (ANOC) revealed that he thought Blatter should be re-elected.

Sheikh Ahmad, who is well-placed in future to act as FIFA’s man in the International Olympic Committee (IOC) and is even seen by some as a possible future FIFA President, had been seen in discussions with Platini here last night.

Blatter must now embark on the massive task of rebuilding FIFA’s shattered image.

If anything, this is probably even more tarnished tonight than it was before, now that it has spurned this opportunity to jettison the leader who has presided over its transformation into a global laughing-stock.

Related stories
May 2015: Bomb threat fails to disrupt FIFA Congress, as Blatter looks to reassert his grip
May 2015: Platini pleas to determined Blatter to step down as Prince Ali campaign seemingly gains momentum
May 2015: UEFA calls for postponement of FIFA Presidential election
May 2015: United States Department of Justice declare war on FIFA on dramatic day for football
May 2015: FIFA in turmoil following dawn arrests