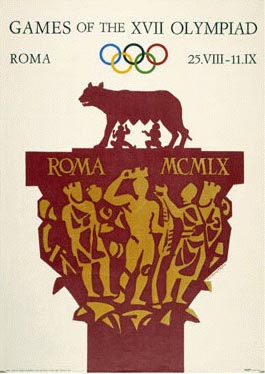 For the first time ever the Olympics were televised around the world and it could be argued that the Games truly began its journey to the mega event they are today.

Rome owed the Olympics. It was a Roman emperor, Theodosius II, who had brought the ancient Olympics to an abrupt halt in 393AD because he considered them to be pagan.

Fittingly, the Romans blended the old and new. They built a brand-new Olympic Stadium that could hold 100,000 but also converted magnificent ancient buildings for other competitions, such as gymnastics and wrestling, held in the Basilica of Maxentius, which had staged the same event 2,000 years earlier.

A record number of countries turned up to compete in record temperatures. The star of the Games was Peter Snell, a little-regarded New Zealander who beat the favourite Roger Moens of Belgium to win the 800 metres. Then, in the race that immediately followed, Snell's team-mate Murray Halberg took the 5,000m.

To complete a hat trick of Antipodean victories Australia 's Herb Elliott then claimed the gold medal in the 1500m, winning by the massive distance of 20 metres and breaking the world record.

Britain 's Don Thompson had prepared for the 50 kilometres walk by exercising in his bathroom in Kent filled with heaters and boiling kettles. It paid off when he won gold.

Fearing that the burning sun might lead to severe dehydration problems for the athletes, organisers scheduled the marathon to be run at night.

Uniquely for an Olympic marathon, the race neither started nor finished in the main stadium, ending instead at the Arch of Constantine in the middle of the city.

The first man across the line was the unknown Ethiopian Abebe Bikila who ran through Rome 's spectacular torch-lit avenues in bare feet. His achievement would inspire generations of Ethiopian runners, who today dominate long-distance running.

After Melbourne , the International Olympic Committee were relieved the Games were not affected by political boycotts and the growing expansion of the movement was illustrated by the fact a record 44 countries won medals.