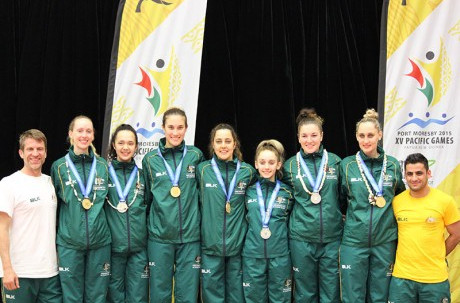 Australia produced their best performance of Port Moresby 2015 so far as they claimed four women’s taekwondo Pacific Games gold medals at the Taurama Aquatic and Indoor Centre today, while New Caledonia dominated the squash events at the Steamships Racquets Club.

Keshena Waterford got them off to the perfect start by claiming the under 49 kilograms title, beating home favourite Rahab Loi, while Lindsay Gavin of New Caledonia did enough for bronze, as did Tahitian Taraina Rataro-Tuihaa.

Waterford’s success was the prelude to an afternoon of Australian dominance on the taekwondo mat as the sport made its long-awaited entrance at the 15th Pacific Games with a packed opening day of competition.

Caroline Marton went on to seal the under 53kg crown with victory over Alison Deane of Tahiti, with Theresa Tona of Papua New Guinea and Doriane Gohe of New Caledonia, claiming third.

Her victory was the first of two for the Marton family as sister Carmen then sealed gold in the under 62kg weight class, beating Rhiannon O’Neill of New Zealand 13-0.

The final Australian triumph came thanks to Nicole Men, who was too strong for Papua New Guinea’s Samantha Kessman.

Tokataake Mwenweata of Kiribati clinched a rare success for her country with third, while Fiji's Venice Elizabeth Megan was also able to earn a podium berth.

Tahiti also enjoyed a fruitful day in the taekwondo events, finishing the day with a double as Mataheitini Raihauti reigned supreme in the under 57kg division, before team-mate Moehau Faaite was the victor in the over 73kg category.

Elsewhere, New Caledonia wrapped up both men’s and women’s doubles squash gold with a classy display at Steamships Racquets Club.

Nicolas Massenet added to his singles title as he partnered 40-year-old Fabian Dinh to gold in the men's competition as they beat Fijian pair Ramit Parshottam and youngster Marika Matanatabu 11-7, 7-11,11-4.

Their team-mates Gael Gosse and Laurent Guepy sealed a commanding performance from the country by taking bronze.

New Caledonia also took the women's doubles honours as Christelle Negle and Sylvaine Durand beat Papua New Guinea's Nicole Gibbs and Sheila Morove to the title thanks to a 11-7, 11-9 win.

The success for New Caledonia continued in the men’s doubles tennis event as Julien Delaplane and Nickolas Ngodrela overcame Vanuatu's Cyril Jacobe and Aymeric Mara in the final, with Fiji taking bronze.

Papua New Guinea's Abigail Tere-Apisah and sister Marcia secured the women's crown after beating nieces Patricia and Violet Apisah 6-3, 6-3 in a gold medal match that proved to be a family affair.

Tahiti’s Estelle Tehau and Mayka Zima rounded off the podium by claiming bronze.

The host country were also able to win gold in the women’s softball tournament as their 7-0 victory today gave them an unassailable 2-0 lead in their three-match series with American Samoa, the only other entrants in the competition.

Following a 17-0 thrashing of a hapless American Samoa team yesterday, they managed to secure the title with a match to spare with another commanding performance.

It has been confirmed that the third game in the series will still take place as planned.