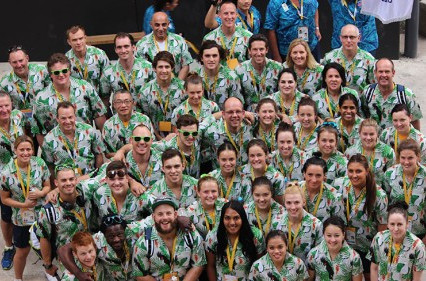 Pacific Games Council (PGC) executive director Andrew Minogue has hailed the participation of Australia and New Zealand at at the 15th edition of the event, which finished here yesterday.

Both countries competed at the Pacific Games for the first time in the competition’s 52-year history, representing a major step forward for sport in the region.

The Australian contingent was made up of 43 athletes and took home a total of 47 medals, including 19 gold.

New Zealand finished with a haul of 20 medals, with Angela Kilday’s victory in the under 46 kilograms taekwondo event their only gold.

Both countries were invited to take part by the PCG in four sports - taekwondo, sailing, rugby sevens and weightlifting - and were largely well received throughout the two-week long event.

It is hoped the two Oceania powerhouses will continue to compete at future editions of the Pacific Games.

New Zealand's participation here, though, has been fraught with controversy after their football team decided not to stay in the Athleties' Village due to the accommodation being, what they called, "substandard".

Weightlifter Douglas Sekone-Fraser then withdrew from the team after posting a hashtag of "cannibals" on a picture of locals dressed in traditional attire on social networking site Instagram before the Opening Ceremony, held on July 4.

Their men's football side, competing purely in the Olympic qualification tournament, were thrown out hours before they were due to face Fiji for a place at Rio 2016 after allegedly fielding an ineligible player.

New Zealand Football have appealed the decision made by the Oceania Football Confederation after they insisted they did "nothing wrong" and that the player in question, South African-born Deklan Wynne, was eligible to play.

“On the evidence we have seen in the four sports, Australia and New Zealand have added to the competition and the quality of the competition,” Minogue said.

“The crowd has been appreciative of both countries athletes.

“My personal highlight was the rugby sevens final between Australia and Fiji.

“Australia really took to it Fiji and it signified to me that when pacific athletes dedicate themselves to excellence they can match Australia.”

He added: “The spirit here has been incredible, an amazing welcoming for Australia at its first Pacific Games.

“From what I’ve heard Papua New Guinea has taken to the Pacific Games to a new level.

"The facilities are world class and the Village is equal to any Olympic Games I’ve been to.

“I think they have an amazing legacy for the future.”

Another nation to praise the facilities and hospitality are Fiji, who returned home with a total of 114 medals, including 33 gold, to finish fourth on the medal table.

They dominated the hockey finals on the last day of competition, winning both men’s and women’s crowns, while they also enjoyed a high level of success in shooting, lawn bowls, karate and weightlifting during the event.

“It has been an awesome experience for Team Fiji,” Fiji Association of Sports and National Olympic Committees President Joseph Rodan said.

“The venues were of international standard, the athletes were accommodated very well at the Games Village, the food was nice, the people even nicer and friendly.

“We have to admire the hard work and dedication put in by everybody in Papua New Guinea to host a successful games.”

Port Moresby 2015, which attracted more than 3,000 athletes from 24 countries competing in 28 sports, came to a conclusion with a festival-style Closing Ceremony at the Sir John Guise Stadium yesterday.

Papua New Guinea topped the overall medal standings for only the second time in their history with an unconfirmed total of 87 golds.