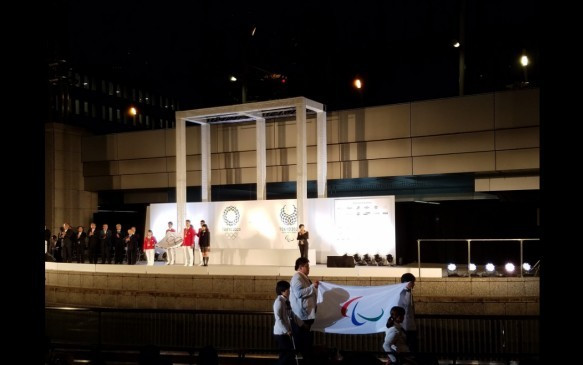 The Paralympic flag today arrived in Tokyo from Rio de Janeiro and has been hung at the t the Tokyo Metropolitan Government Plaza alongside the Olympic one which arrived in the Japanese capital last month.

The flag-raising ceremony was watched by 3,000 spectators and was followed by the start of the Tokyo 2020 Olympic and Paralympic flag tour.

During the coming year, the flags will be exhibited in more than 60 sites in and around Tokyo, including some of the small islands that are part of the metropolis, and in three of the prefectures affected by the 2011 East Japan earthquake.

These events are aimed at building further awareness and support for the Games throughout the country, Japanese officials claimed.

The arrival of the Paralympc flag was overshadowed slightly by the performance of the Japanese team at Rio 2016, where they failed to win a gold medal for the first time since the debut of the Games at Tokyo in 1964.

But Kento Masaki, who won a Paralympic bronze medal in Judo at Rio 2016, is confident that event will still be a success.

"I was humbled and proud to see the Olympic and Paralympic symbols in our homeland,"he said.

"The Paralympic flag that we welcomed today in our city is a symbol of the inspiration that Paralympians bring to the world, showing us how to overcome challenges and achieve great things," said Mutō.

"That was the theme of the Tokyo 2020 presentation at the Closing Ceremony of the Rio Paralympic Games and we are now looking forward to carrying the Paralympians’ message across the whole of Japan.

"The flag tour is aimed at keeping the momentum growing and at embodying one of the core concepts of the Tokyo 2020 Games, which is ‘Unity in Diversity'.

"Interest in the Tokyo 2020 Games is also strong in many other countries and made the Tokyo 2020 Japan House in Rio one of the most popular hospitality houses in the Brazilian capital during the 2016 Games.

"It welcomed more than 82,000 visitors from all over the world, helping to showcase Japan’s culture and raise enthusiasm towards the host country of the 2020 Games."