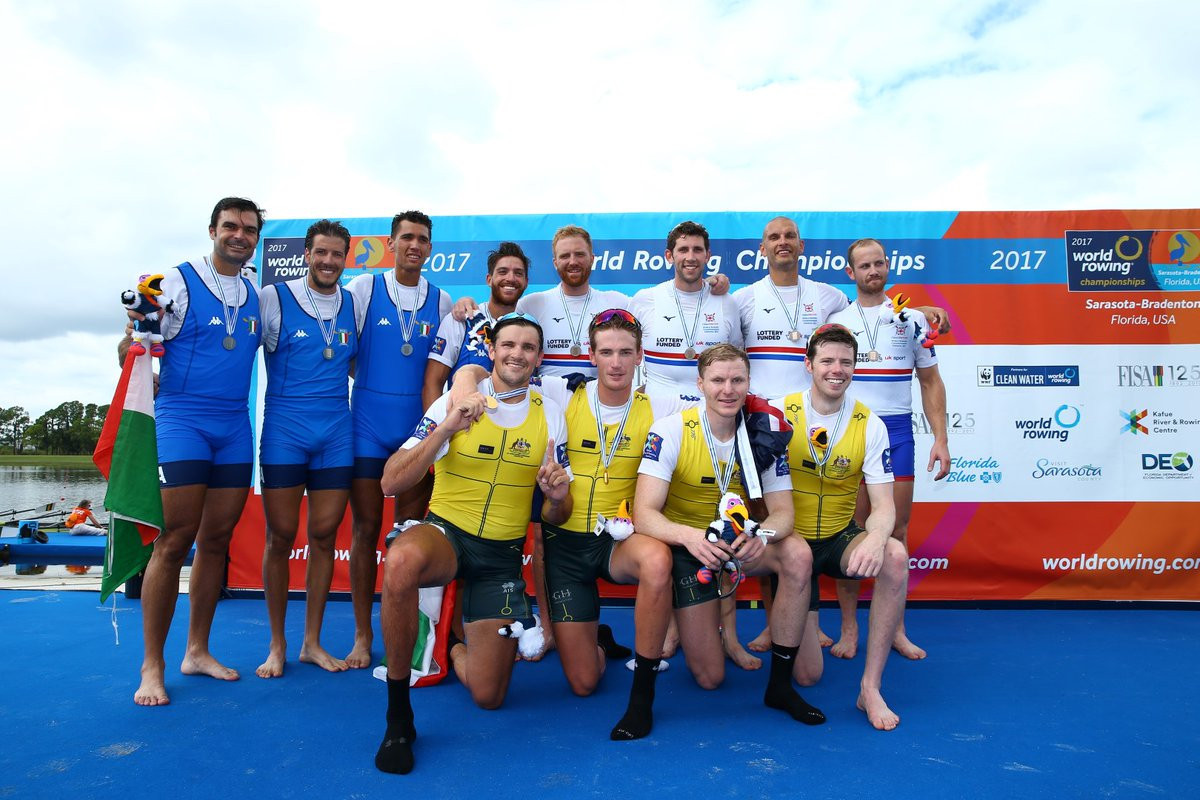 Britain, Olympic champions in the men’s four boat class on the last five occasions, had to settle for a global bronze at today’s World Rowing Championships in Sarasota-Bradenton despite the return of Rio 2016 eights gold medallist Will Satch, who had to be substituted from the boat due to illness just before the semi-finals.

Even with Satch back, the British quartet were unable to prevent their arch-rivals Australia – stroked by Alexander Hill with Jack Hargreaves, Spencer Turrin and Joshua Hicks in the boat - claiming its first world gold in this event for 26 years in assured fashion at the Nathan Benderson Park in Florida.

"We’ve been targeting this boat for many, many years, so it is great to finally win it again," said Hicks.

Moe Sbihi, the only remaining member of the British men’s four that won at Rio 2016, commented: "Australia showed their quality today.

"We weren’t able to race them in Lucerne, so we weren’t sure how we would compare.

"It’s been a difficult summer, but we gave it our all today.

"I think we may have raced a bit too much by numbers, rather than racing itself."

European champions Lithuania, favourites to win the men’s quadruple sculls, duly did so, but Britain won the race for silver ahead of Estonia, who took bronze, and The Netherlands, despite having had to make a last-minute medical swap when Peter Lambert was taken unwell and had to be replaced by Graeme Thomas from the men’s double.

During the delay to the start, all the athletes concentrated on staying hydrated on another hot day.

Lithuania, winners of the most recent World Rowing Cup, came past early leaders The Netherlands at halfway and were never seriously challenged.

"I got a million WhatsApp messages telling me I was needed straight away," said Thomas.

"So I ran over straight away.

"Today I did my best - I think this shows the depth of the squad and that the quad is making a name for itself in GB rowing."

Croatia’s Martin and Valent Sinković, now racing in the men’s pair after switching from the event at which they won Olympic gold last summer, the men’s double sculls, came within a single stroke of adding another global gold today – only to be passed at the last by Italy’s Matteo Lodo and Giuseppe Vicino, who won by 0.34 seconds.

The main challenge to the Croatian pair appeared to be coming from New Zealand, for whom James Hunter and Thomas Murray - filling the places left by the unbeatable and now retired combo of Eric Murray and Hamish Bond – had taken gold to their silver at the most recent World Rowing Cup.

The Sinković brothers took over the lead from New Zealand at the halfway point, but coming into the final stretch the even faster finishing Italian boat passed the flagging Kiwi pair before doing just enough to take gold.

"We’ve done a lot of training on our final 500  metres, because we knew that would be the toughest part with the Croatians," said Vicino.

Valent Sinkovic commented: "Congratulations to Italy, they were too fast in the last 500 metres.

"I think we can do more in the future, we didn’t have the kilometres in the pair just yet."

Grace Prendergast and Kerri Gowler of New Zealand held off the challenge of vociferously supported home athletes Megan Kalmoe and Tracy Eisser to take gold in the women’s pair, repeating their victory over the US crew at World Cup III, with bronze going to Denmark.

But silver and bronze medallists Italy and China were not far away at the line.

There was an upset in the lightweight women’s double sculls as New Zealand’s Zoe McBride and Jackie Kiddle, winners of the most recent World Cup in Lucerne, had to give best to an exhausted-looking Romanian pairing of Livia Lehaci and Gianina-Elena Beleaga, who claimed gold by 0.29 seconds.

The home pair of Emily Schmeg and Michelle Sechser were a fraction behind as they took bronze.

Australia took the women’s four title ahead of Poland, with Russia earning bronze.

Poland and Great Britain had recorded the fastest times coming through from the heats in the women’s quadruple sculls, but they had to settle for silver and bronze respectively as The Netherlands produced a huge finish to take the title, with Germany’s Olympic champions fourth.

The Netherlands' boat of Annika van der Meer and Corne de Koning were easy victors in the Para PR2 Mixed Double Sculls in a World Championship best time, ahead of Ukraine and Poland.