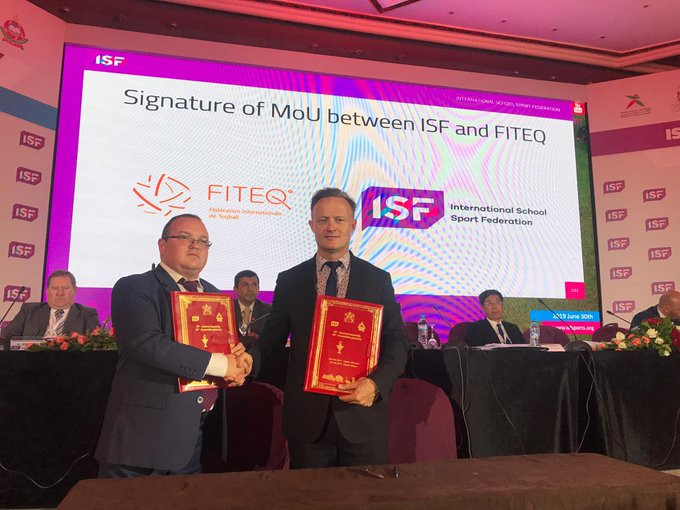 The aim of the MoU is for teqball to be included as a competition sport at future ISF events.

It also represents a commitment from FITEQ to support national school sport federations and to strive to create more opportunities for young people to play teqball around the world.

"I am confident that teqball will be a success in the International School Sport Federation's programme," Petrynka said.

"It is an innovative sport with a strong youth appeal and I am very proud to announce the partnership with the International Teqball Federation.

"Teqball can soon become not just a demonstration but also one of the most exciting competition sports at our international events."

Laurent Petrynka (ISF President) and Marius Vizer Jr (FITEQ Head of International Relations) have signed a Memorandum of Understanding to jointly promote teqball to be a competition sport at future ISF competitions, and to support the national school sport federations.#FITEQ pic.twitter.com/Phr9sa35sV

Vizer junior added: "This is a meaningful step forward for the sport of teqball and helps us as a federation to create a pathway for young people to enter the sport and take advantage of the opportunities we have to compete at an international level."

FITEQ has recently claimed teqball is a step closer to its goal of being added to the Olympic programme after achieving official recognition from the Association of National Olympic Committees of Africa (ANOCA) at its Annual General Assembly.

Representatives from the 54 NOCs that make up ANOCA met on the island of Sal in Cape Verde, where they agreed to give FITEQ their seal of approval.

The approval from ANOCA followed that from the Olympic Council of Asia at its Annual General Assembly in Jakarta in August last year.

As part of a development plan to support the growth of teqball in new territories, FITEQ has previously announced it will donate tables and funds to NOCs planning on competing in future events.

The plan includes €1.5 million (£1.3 million/$1.7 million) worth of grants designed to help promote the uptake of teqball across all continents.