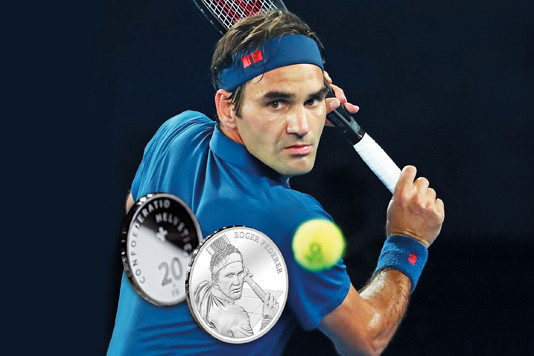 Swissmint has announced it is dedicating a commemorative coin to Swiss tennis icon Roger Federer – the first living person to receive the honour.

Swissmint revealed that it is celebrating Federer with a 20-franc silver coin, which will have an issue date of January 23 next year.

It plans to release a second coin with a different design – the "Roger Federer" 50-franc gold coin – in May.

In a statement, the Swiss Government said Federer is the best-known Swiss person both on and off the court.

In addition to his countless tennis records, including the most Grand Slam men’s singles titles, he also runs a charitable foundation for children in southern Africa and was the first Swiss UNICEF Goodwill Ambassador.

Swissmint wrote that Federer is "the perfect ambassador for Switzerland".

They added: "He has a unique way of embodying likeability, down-to-earthness, success and eloquence."

The 20-time Grand Slam champion posted an image of the coin on Instagram along with a message of gratitude.

"Thank you Switzerland and Swissmint for this incredible honour and privilege," Federer said in an Instagram post.

Anticipating high demand for the coin, Swissmint has launched for the first time a pre-sale of an "uncirculated quality" of the coin.

Federer fans can purchase the uncirculated coin for CHF30 (£23/$30/€27) from today until December 19 through the Swissmint website.

Proof-quality coins will only be available from the issue date onwards.

Earlier this year, commemorative coins were dedicated to the Apollo 11 moon landing and the centenary of the Circus Knie.