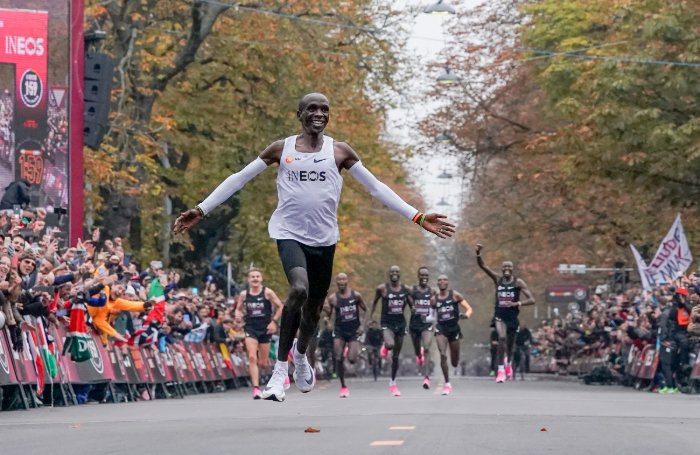 Eliud Kipchoge has chosen the 2020 Virgin Money London Marathon as his first race since becoming the first human to run a sub-two hour marathon in Vienna in October, it was announced today.

The Kenyan has his sights set on continuing his incredible streak of record-breaking performances in London on April 26 in what will be the 40th edition of the race.

The announcement that the 35-year-old Kipchoge is returning to the British capital to defend his London Marathon title coincided with the the news he had been voted BBC Sports Personality's World Sport Star of the Year.

Kipchoge became the first person to run a marathon in under two hours in October.

He completed 26.2 miles 1 hour 59min 40sec in the Ineos 1:59 Challenge in Vienna in Austria, although the performance is not recognised as an official world record by World Athletics.

Kipchoge, winner of the Olympic gold medal at Rio 2016, had in April broken his own London Marathon record when he ran 2:02:37.

"I am delighted to be returning to the Virgin Money London Marathon in 2020," Kipchoge said.

"I love running in London where the crowd support is always wonderful.

"Breaking the two-hour barrier in Vienna was an incredible moment.

"It showed that no human is limited and that is a belief that continues to drive me on to set new objectives.

“Making history in London is my next target.

"I am proud that I am currently the only male able-bodied athlete to have won this great race four times and that no one, male or female, has won it more than that."

Kipchoge came top in an online vote to win the BBC award.