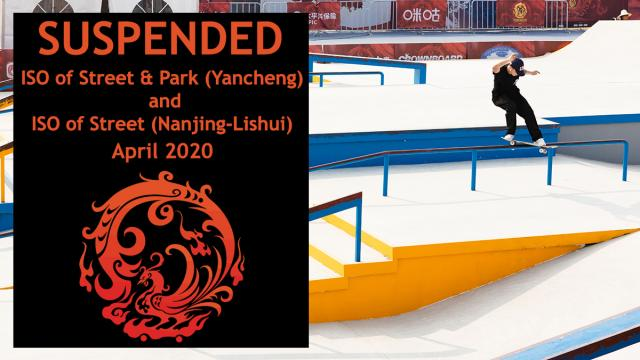 World Skate has postponed two Olympic Qualification events in China next month due to the ongoing coronavirus outbreak.

The competition in Yancheng had been due to take place from April 13 to 19.

Yancheng took over the place in the calendar last month, following the initial postponement of the Nanjing event.

Both events have now been postponed.

"The global effort to contain the Novel Coronavirus outbreak continues to impose an ever evolving series of health risks and travel restrictions around the world," World Skate said.

"With growing concern over these medical risks for visiting teams, with travel restrictions in mind and after having carefully evaluated the situation, World Skate has decided to suspend April's Olympic Qualification events in China, excluding Street League Skateboarding World Tour in Beijing."

World Skate added that the governing body would continue to monitor the situation in China ahead of two other events in the country.

This includes the Street League Skateboarding World Tour in Beijing, which is scheduled to take place from April 28 to May 3.

The Park World Championships is also due to be held in China, with Nanjing due to host the event between May 25 and 31.

World Skate added that information on the rescheduling of suspended events will be announced as soon as possible.

More than 87,000 coronavirus cases have been reported worldwide since the outbreak began in China.

China has been the country most impacted by the outbreak, with 79,000 cases reported in the country and 2,870 deaths.