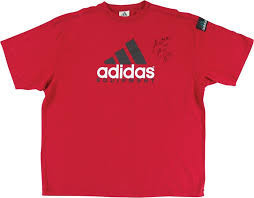 A signed high school all-star game undershirt of the late basketball legend Kobe Bryant, has sold for $6,000 (£4,800/€5,300) with a percentage of the proceeds going to charity.

Sold at auction by Lelands in conjunction with Green Eyes Estate Sales in Michigan, the t-shirt was worn by Kobe Bryant at the 1996 Magic Johnson Roundball Classic.

The red Adidas shirt comes autographed on the top left shoulder and is inscribed with the number 33, with the signature certified by Professional Sports Authenticator and comes with a letter of authorisation too.

Even in high school, Bryant was showing signs of his potential, scoring 21 points in the all-star game at the age of 17.

After the game, he was at the forefront of media attention, eventually being interviewed by ESPN's legendary broadcaster Dick Vitale in the auctioned shirt.

After the interview, the owner of the shirt had asked Bryant for his shoes, but instead was given his shirt.

Bryant died at the age of 41 in a helicopter crash earlier this year along with his daughter Gianna and seven other passengers.

The Foundation aims to help those in socio-economic difficulties, communities in poverty, women and to look towards initiatives to create financial assistance for the public.

Bryant is regarded as one of the great basketball players of all time, sitting fourth on the all-time point scorers list in the National Basketball Association (NBA), ahead of Michael Jordan.

At 17, he was drafted to the Los Angeles Lakers, missing university and becoming the first guard to be drafted directly from high school.

He retired from basketball in 2016 during which time he won five NBA titles with the Lakers and became an 18-time NBA All-Star in every year between 1998 and 2016 with the exception of 1999.

He also holds two Olympic gold medals with the United States team from the Beijing 2008 and London 2012 Games.