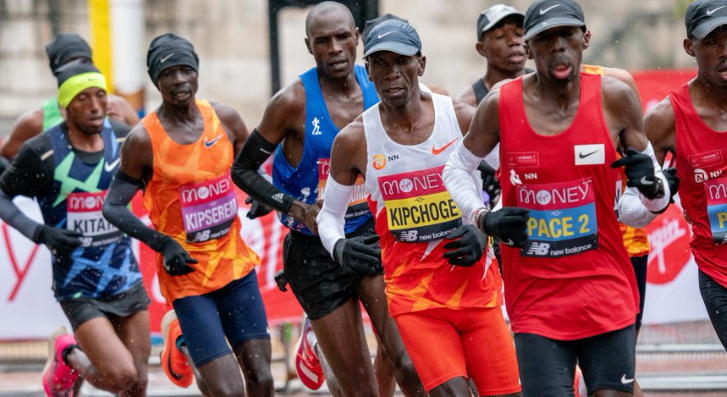 In perhaps the biggest shock in the history of the London Marathon, the overwhelming men's favourite, Eliud Kipchoge, was soundly beaten as Ethiopia's Shura Kitata sprinted home to win in 2 hours 5min 41sec amidst the wind and rain of the looped, closed 1.3 miles course around St James's Park.

After Kipchoge's compatriot Brigid Kosgei had ruthlessly and successfully defended her title in the opening women's elite race, the expectation was that the world record holder, who a year ago became the first runner to better two hours for the marathon, would complete a Kenyan double.

This was especially so after Friday's (October 2) withdrawal of his main perceived rival, Ethiopia's Kenenisa Bekele, with a calf injury.

After finishing eighth in a time of 2:06:49, Kipchoge revealed that he had been troubled throughout much of the race by a what he described as a blockage in his right ear.

"I am really disappointed," Kipchoge, who had been a 1-20 favourite to win, told the BBC.

"Physically in the last 15 kilometres I feel my right ear is blocked.

"It just happened in the race.

"It was cold but I don't blame the conditions – I had a problem with the head."

After 25 kilometers my ear blocked and it couldn't open anymore. But this is how sport is, we should accept defeat and focus for the winning next time.

Thanks for the support. pic.twitter.com/No1Kcyizco

Afterwards he told the BBC that he had been helped in his strategy by his erstwhile training partner Bekele.

"For this race I prepared very well and Kenenisa helped me," he said.

"He advised me how to run the race, and I did what he said."

As a relatively slow race reached the last four laps, Kipchoge – ever inscrutable – remained within a group of eight men, all of whom had run faster than their projected finishing time.

It was Kitata who produced the surge to the front that finally revealed the 35-year-old Olympic champion as human.

What a finish to the 2020 Virgin Money London Marathon as Shura Kitata wins the sprint finish.#LondonMarathon #The40thRace pic.twitter.com/y1HsUBA4f3

Kipchoge failed to respond, simply slipping back down the group that had turned into a line, and dropping out of contention.

By the last lap the leading group numbered Kitata, Kipchumba and two other talented Ethiopians – Mosinet Geremew, who is fourth on the all-time list with 2:02:55 – and Sissay Lemma.

Geremew was the first to feel the pressure as the medallists moved on and prepared for a sprint over the final few hundred metres as they turned into The Mall.

It was the tall man, Kipchumba, who broke for home, but Kitata, his head moving like a 200 metres runner, found it within himself to regain the lead for the last and decisive time over the final 20 metres to win.

Kipchumba finished a second behind the winner, with Lemma clocking 2:05:45 in third place and Geremew coming home fourth in 2:06:04.

An efficient pacing job by Sir Mo Farah helped two Britons to finish inside the Olympic qualifying time of 2:11:30.

Hall – whose final effort came over the last 100 metres to the normal finishing line in The Mall – was rewarded with a personal best of 2:22:01, having been 40 seconds behind Chepngetich with just two of the 42 kilometres remaining.

The Kenyan looked bemused after taking third place in 2:22:05.

Kosgei, who made her decisive break shortly after the 30km mark to move clear of her only remaining challenger at the time, Chepngetich, won with her fourth best time over the distance.

"It was wonderful to race today because we had not prepared well because of the pandemic," she said.

"The weather today made it very difficult.

"But I will be well prepared next year and ready to bring back again good results."

And what a battle for second as @SaraHall3 chases down Ruth Chepng'etich and beats her with just meters remaining! An incredible finish!

At one point in the race it looked as if Kosgei, who set her world record of 2:14:04 in Chicago last year in a mixed race, might secure the women-only world record of 2:17:01 set by compatriot Mary Keitany in winning the 2017 London Marathon.

But that target slipped from view in the conditions.

Another US runner, Molly Seidel, took sixth place in a personal best of 2:25:13.

In their absence the British title on the day went to Natasha Cockram, who was 13th in 2:33:19, one place ahead of fellow Brit Naomi Mitchell, who clocked a personal best of 2:33:23.

At 10 miles Kosgei and Chepngetich appeared to be the only contenders as they followed the last pacemaker, Vivian Kiplagat.

Thereafter it was a matter of the two pony-tailed Kenyans, identically-clad in orange singlets and blue Nike shorts, running side-by-side over the still wet and glistening road.

Even their pink shoes looked the same, but Kosgei had dyed her ponytail red.

Around the halfway mark, Chepngetich tested the water with a move, but Kosgei – despite having clearly to work – covered it, and the runners passed the mark in 1:08:11.

What was noticeable was that it was the world champion who was hugging the optimum blue line on the road while the world record holder moved around the route a lot more.

As one-and-a-half hours came up the lead pacemaker had gone and the two leaders forged on, passing 25km in 1:21:17.

But at the 30km point, which she passed in 1:38:18 with Chepngetich one second behind her, Kosgei struck decisively to move 40 metres clear – a move unfortunately not shown by the TV feed of the race.

At that point, however, the fastest moving runner in the race was Hall, who was closing swiftly on the third-placed Bekere and was soon past her.

Hall, looking easy in third place, went through in 2:14:38 and was gaining on the tiring world champion, but with just two kilometres to go she appeared to be running out of road.

Meanwhile, an event that has been uniquely shaped this year by the coronarvirus continued all over the planet as a world record number of 45,000 entrants ran their own marathon races, tracked by an official app.